Hi everyone! How are you? 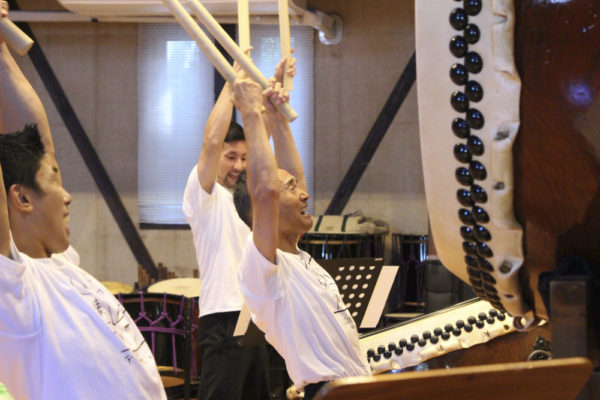 The other day, we had rehearsals at Kodo Village and Yoshikazu showed all the junior members (which in this case means everyone!) his body and soul approach in practice.

“Your passion shows on your face AND your back.” 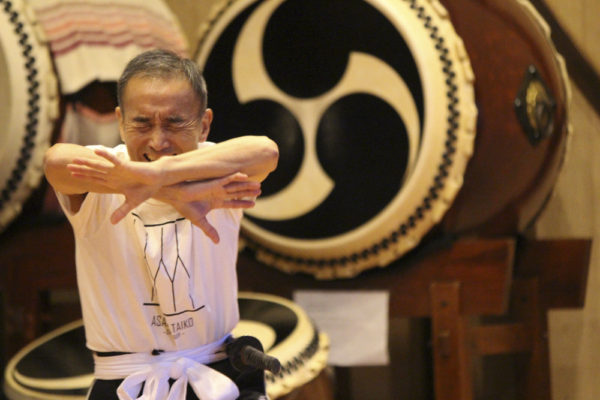 When I heard him say that, I felt the weight of those fifty years in his embodiment of those words.

For this performance, we will welcome Iwasaki Onikenbai Hozonkai (Iwasaki Demon Sword Dance Preservation Society), who have taught Yoshikazu Fujimoto and Kodo for many years, and Wachi Daiko Hozonkai (Wachi Taiko Preservation Society) from Yoshikazu’s hometown, Wachi, where his taiko journey began. Kodo will be there right alongside these special guests and Yoshikazu, giving our all to celebrate our most senior member.

I am really looking forward to this performance! 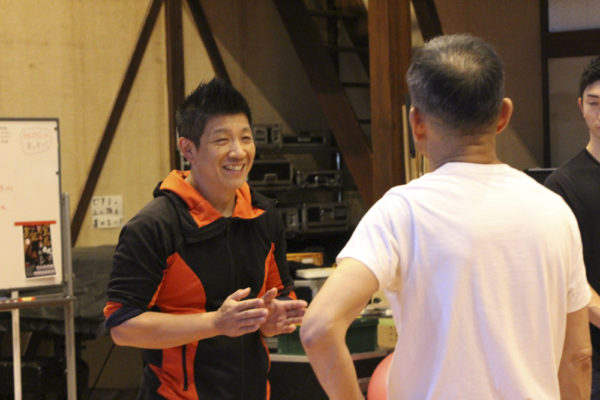 Kodo’s latest production MEGURU will be on stage at Bunkyo Civic Hall until Dec. 23, the day before “Taiko Warabe Goju-nen” on Christmas Eve.
I really hope you’ll take this opportunity to see Kodo’s depth and breadth as an ensemble through both of these distinct concert programs.

As I said in my New-Year greeting for 2018:
“(Yoshikazu Fujimoto) is a man who has stood apart as a pioneer in performing arts and remains in a class of his own. Watching over and raising the next generation is very important, and we have learned the magnificence of undertaking these tasks ourselves by observing many performing arts. As we celebrate the career of our group’s most senior member, we would like to express our gratitude for Kodo’s ability to carry out a wide range of activities each year. The Kodo Group looks forward to congratulating Yoshikazu along with the entire audience who gathers for this auspicious event.” 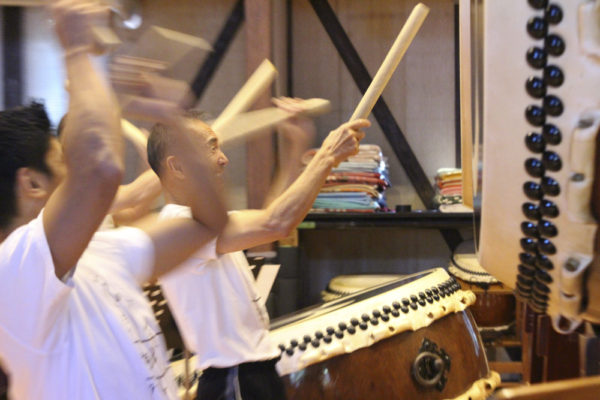 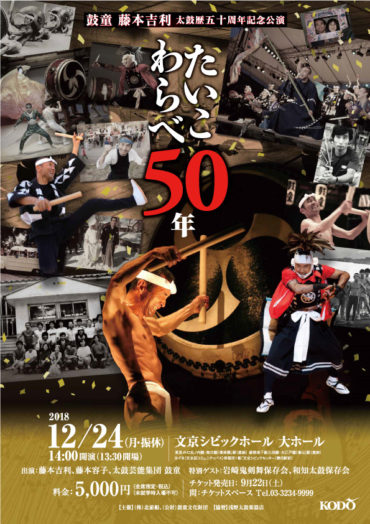 On Sunday October 1st, I led Onikenbai (demon sword dance) and Odaiko (big drum) workshops at Gettoen in Shinto Village, Gunma Prefecture. There was a social get-together for the workshop participants the night before where we all had a great time chatting, drinking, singing, and playing taiko. 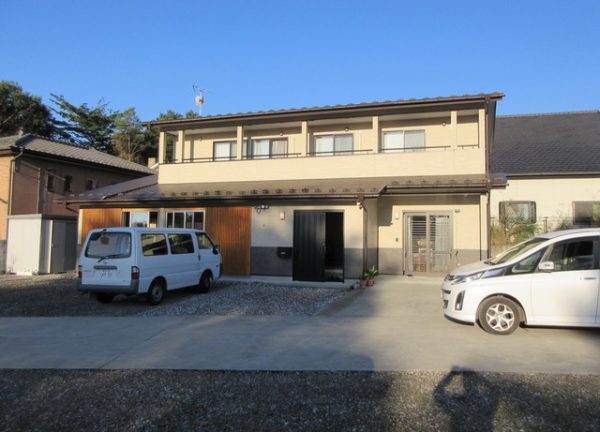 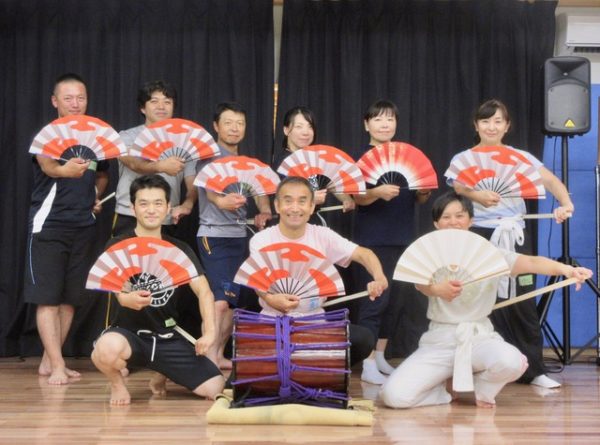 Here’s a picture with the Onikenbai workshop participants. Despite partying heartily the night before, you can see that they were all fresh-faced and ready for the workshop the next day. 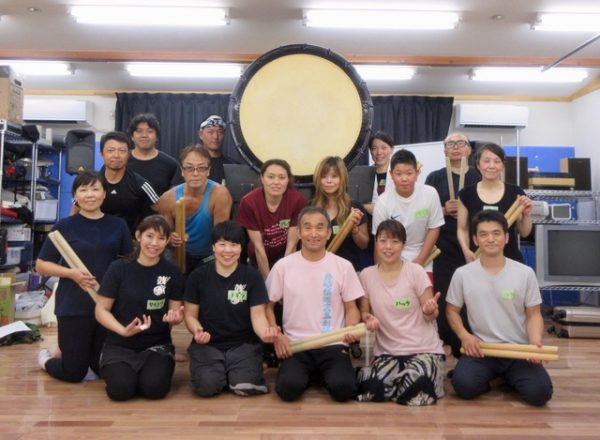 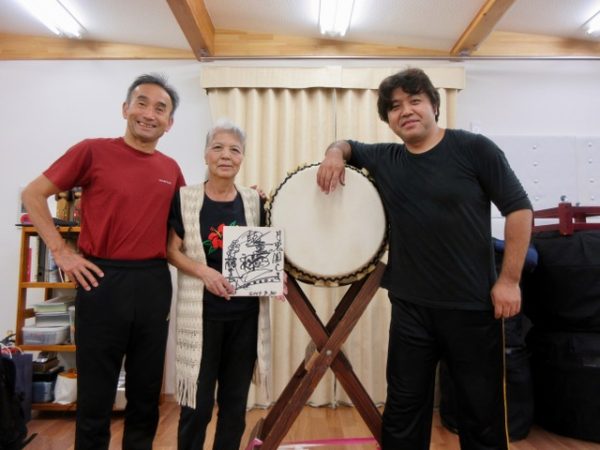 The workshops were presented by Mr. Ryuji Okamura and his mother. Mr. Okamura is a taiko performer and the owner of Gettoen. They run hula dance classes at their studio, too. Mr. Okamura is a former Kodo apprentice and ever since those days he has been a loyal member of our supporter’s club. I am grateful for his support! 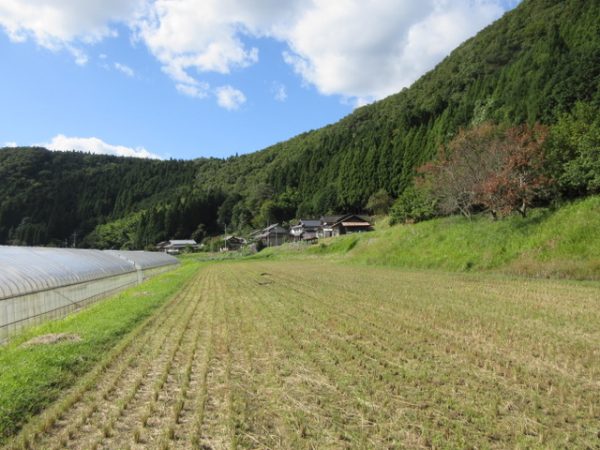 After the workshops I left Gunma and traveled home to Wachi in Kyoto Prefecture. The rice was harvested here on Sep. 5th and our current harvest is in the form of collecting chestnuts in the mornings and evenings.

My next workshops at Gettoen will be held on Sunday Dec. 17. Nearby there is a hot spring that is run by Shinto Village and it costs 300 yen for a two-hour soak. So I recommend you come the day before and have a nice soak in the springs on Saturday. It is really good. And of course, you can spend the night at Gettoen.
I am looking forward to seeing you all at the workshops.

We thoroughly enjoyed “Earth Celebration 2017” thanks to great people and good weather. Thank you very much to everyone who came along! I would like to offer my heartfelt thanks to each and every one of you. 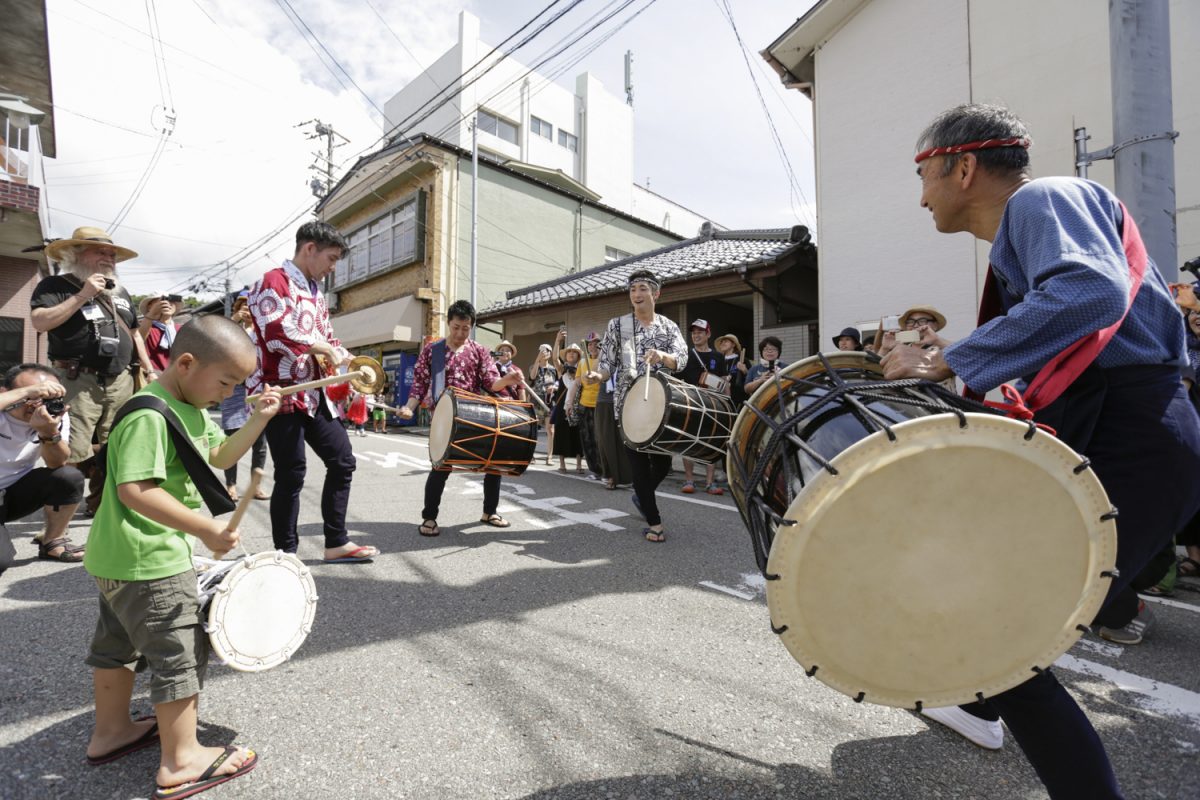 The photo below was taken at the “Living, Learning, Creating” exhibition that Kodo’s Yosuke Kusa curated at EC 2017. My handmade drumsticks were part of the display. 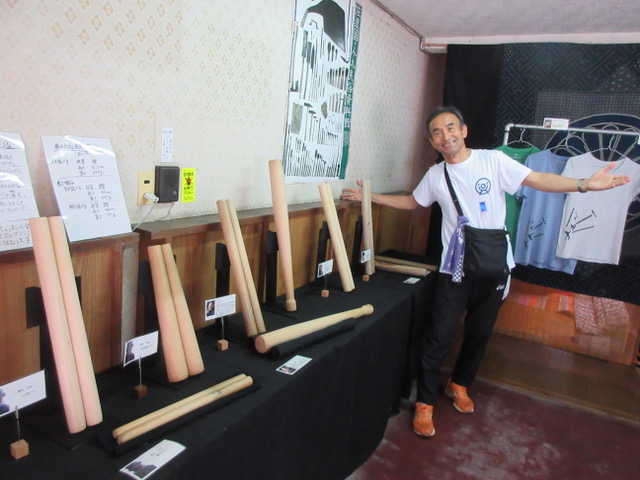 The three pairs of bachi (drumsticks) from the left side of the photo (o-daiko bachi, shime-daiko bachi, Yatai-bayashi bachi) are all my handiwork. Further along to the right are bachi made by Kodo’s Tomohiro Mitome, Yuichiro Funabashi, and Kenta Nakagome. Everyone who came to this exhibition was allowed to pick up the bachi. I wonder what they felt when they gripped our handmade drumsticks in their own hands. 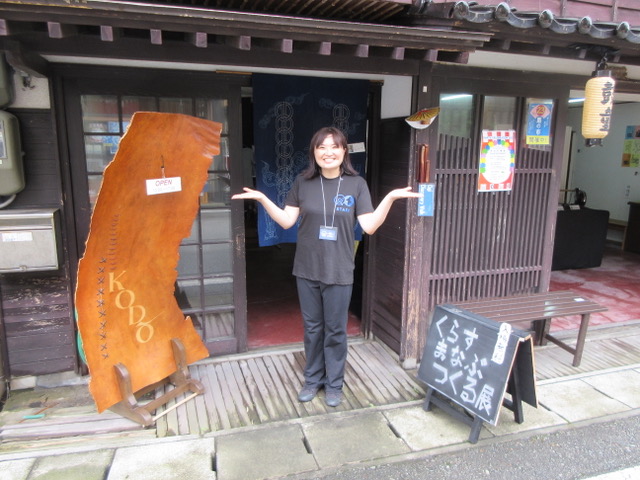 Here’s a picture taken at the entrance to the exhibition at Tennanso, where everyone was greeted by cheerful volunteer Shiho Takano. Tennanso is directly opposite Shiho’s family’s liquor store, Takano-ya.

Today I also want to let you know about my upcoming “Body & Soul Workshop” series, which will be held this weekend on Sep. 2 (Sat) & 3 (Sun) at Taiko no Sato Kyowakan in Tokyo’s Meguro Ward. 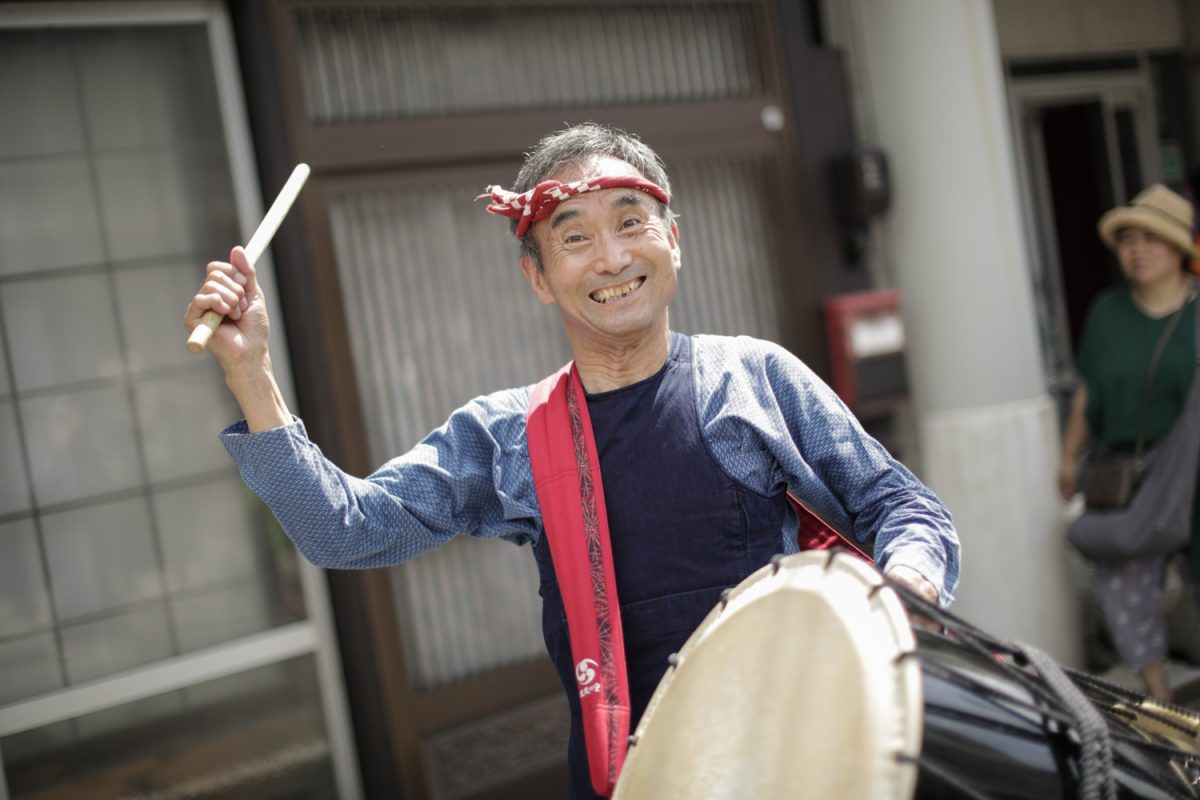 I look forward to seeing you this weekend at my workshops in Tokyo and Ishikawa!

Join the Fujimotos for a fun encounter filled with taiko, songs, and stories from their unique journeys through life. They will present some of the many songs they have encountered to date on Sado Island, on their travels, and with Kodo. You’re in for a special treat at this particular performance because Yoshikazu is bringing his own odaiko along to play. He named his big drum “Taiyo,” which means “sun.” Below is a video message from Yoshikazu and Yoko about their performance in Uchiko. They look forward to seeing everyone there!