I would like to introduce one of the Kodo Apprentice Centre instructors.

Kodo used to introduce the instructors who teach at Kodo Apprentice Centre in our Japanese newsletter and on our website, but we haven’t done so for the past few years.

Our apprentices undertake their apprenticeship with their sights set on the Kodo stage. Naturally, they study taiko, but they also learn a wide range of regional performing arts and instruments other than taiko. That’s one of the great things about Kodo Apprentice Centre. 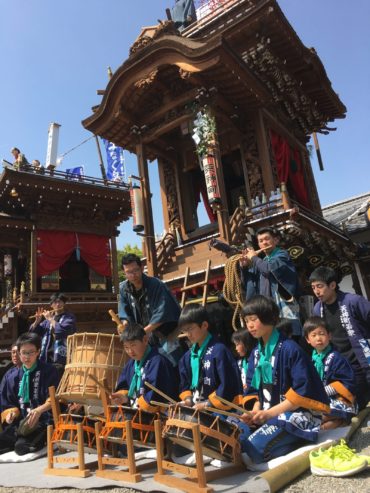 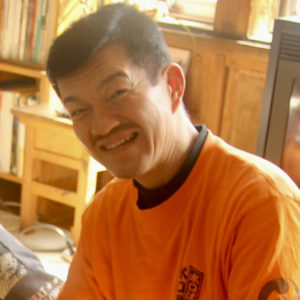 Kazuhito Nomura, Leader, Minakuchi-bayashi Minakuchi Sosha
Kodo Apprentice Centre instructor since 2015.
Kazuhito Nomura hails from Minakuchi in Koka City, Shiga Prefecture. He’s a Minakuchi local, born and bred. He loves Minakuchi-bayashi! The Nomura family have been living in Minakuchi for around 300 years. Koka City is famous for Koka Ninja. Minakuchi has prospered since medieval times as the center of Koka. The biggest festival in the Koka region is Minakuchi Hikiyama Matsuri, which has been held for 300 years. This festival has been designated as one of Shiga Prefecture’s intangible folk culture assets. During the festival, floats (hikiyama) are pulled around the town, and Minakuchi-bayashi is the musical accompaniment that is performed inside the floats.

I hope you’ll enjoy reading Mr. Nomura’s story and his introduction to Minakuchi-bayashi in his own words below.

My serendipitous first encounter with Kodo.

In 2011, Minakuchi Matsuri (Minakuchi Festival) was canceled out of consideration for the areas damaged by the Tohoku Earthquake and Tsunami. In 2012, it was my town Tenjin-machi’s turn to parade its float. But the float whose turn it was the year before didn’t get to do the usual dedication, so they took their turn in 2012 and my town’s turn was delayed until 2013.

It just so happened that Eri Uchida (a Kodo member at that time) had taken some time off in 2013 around Minakuchi Matsuri, which is held on April 20. She had gone back to her family home in Aichi Prefecture and called an acquaintance, saying “I’m going to Minakuchi Matsuri tomorrow, do you want to go with me?” and they came to our festival. The person she called happened to be an acquaintance of mine, too. They came all the way to Minakuchi to observe the festival and to meet me. And Eri was introduced to me, and that’s how our exchange began. If these coincidences hadn’t overlapped, I don’t think I would have crossed paths with Kodo.

The following year, in 2014, I went to Sado Island for the first time and I led Minakuchi-bayashi practice sessions at Kodo Village and Kodo Apprentice Centre. Since then, every year I have had the honor of visiting Kodo Apprentice Centre as an instructor.
Thanks to that first encounter. I also got to perform Minakuchi-bayashi at Earth Celebration with members of Kodo. 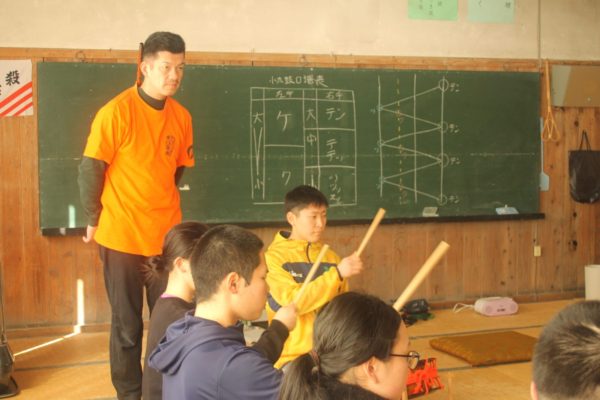 Mr. Nomura teaching at Kodo Apprentice Centre. The blackboard has rhythms on it, written as kuchi-shoga (verbal notation). 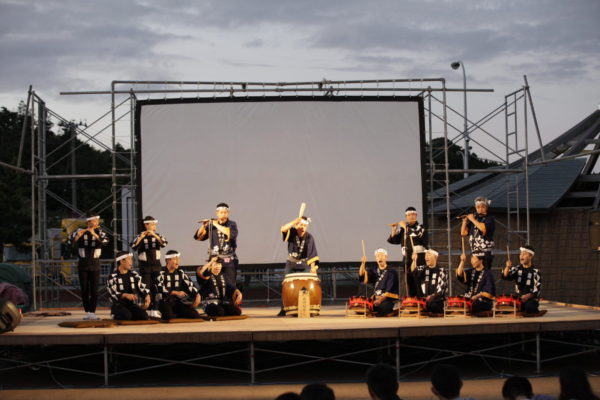 When I teach, I use the oral traditional way that has been upheld in my hometown, Minakuchi, for 300 years.
It’s the method that Japanese people honed by using it to pass down traditional arts, long before Western music reached Japan. So I think that when I teach and share this art, the most important thing for me to do as a teacher is to use this method.

For that reason, most of my instruction focuses on kuchi-shoga from start to finish: first learning the kuchi-shoga that have been passed down orally in Minakuchi for three centuries, then playing the sounds on each instrument exactly like the kuchi-shoga.
Upon that foundation, I teach how each of the sounds played on each instrument should sound, how they are related, and how they all fit together.
I strive to help people understand the blueprint of this 300-year-old o-hayashi (festival accompaniment music) and that an o-hayashi is a living thing. 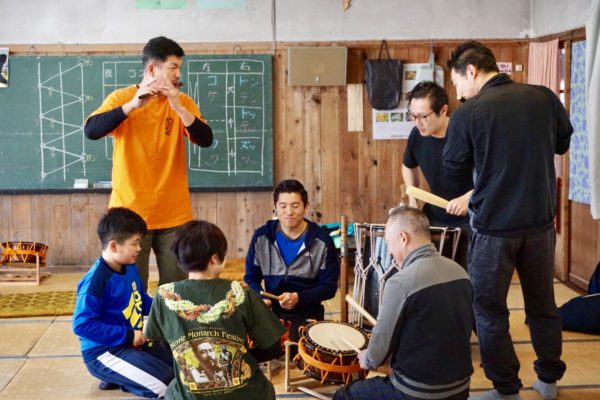 I want the apprentices to experience a range of Japanese music culture firsthand.

Most Kodo apprentices don’t know Minakuchi-bayashi before they enter Kodo Apprentice Centre, so they learn it here for the first time. I think a lot of the apprentices try to play it by converting it into the Western music scale in their heads, thinking of each note as one simple sound.

Japanese music, in particular o-hayashi (accompaniment music), has a lot of rather ambiguous parts, but there are also parts that you have to play in sync with one another, so you really have to concentrate a lot on those key points.

For example, with Minakuchi-bayashi, the taiko and the surigane (metal percussion) both play two parts: they play the ji-uchi (base) rhythm part and a part called tama-uchi that adds ma (space, or pauses). The ji-uchi part is difficult to capture using Western notation—you can’t split it into notes. So the tama-uchi that is designed to go with that complex ji-uchi is also hard to capture.

I think this shows the great musical sensibilities of Japanese people from way back.

I want the apprentices to ditch the fixed notion that all music can be written with the Western staff system, and for them to experience a broad range of Japanese music culture firsthand.
The apprentices will go on to be future Kodo members who will give performances all over Japan and around the world. I want them to share Minakuchi-bayashi, and traditional Japanese culture that is difficult to explain, with people all over the world. 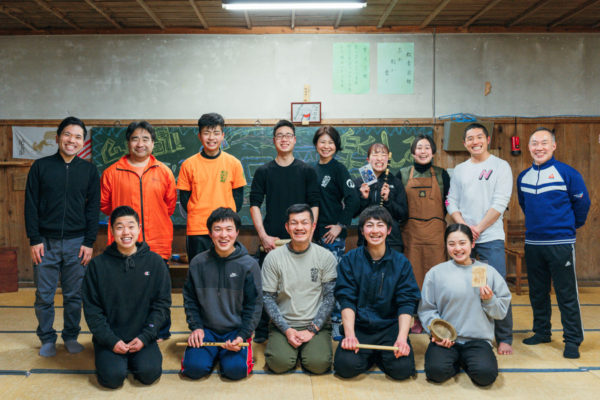 Mr. Nomura and family with Kodo apprentices, members, and staff at Kodo Apprentice Centre after the latest Minakuchi-bayashi practice sessions in March 2022.

Next time, I will introduce Ms. Yumi Nogami, the voice trainer who teaches at Kodo Apprentice Centre. 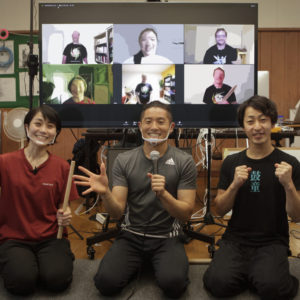