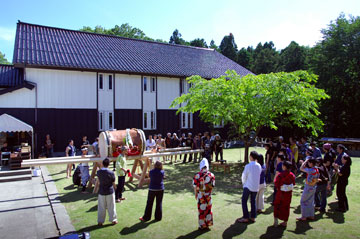 In 1988 Kodo moved to 13.2 hectares of land on the Ogi Peninsula and established the Kodo Village. Now completed are the Main Office Building, Rehearsal Hall, Residential Building, Workshop and Recording Studio. The lives of 60 Kodo members from throughout Japan are centered on this village. Other Kodo facilities on the island include the Kodo Apprentice Centre and the Old Rehearsal Hall in an former schoolhouse which served as the group’s previous headquarters.

In the early 1970’s, in the days of student revolt, Kodo had a youthful dream to build a school for the traditional Japanese performing arts and crafts (Nihon Kai Daigaku, The Sea of Japan College). Sado Islanders’ receptiveness to that dream encouraged the original members to move here. To achieve this goal the group needed to develop the necessary resources and so ‘Sado no Kuni, Ondekoza’ was established and set out to bring the sound of the Japanese taiko to the world.

In 1981 the group re-launched our group under the name ‘Kodo’ and eventually moved to their current home on the Ogi peninsula, Kodo Village. In this beautiful natural environment Kodo is developing a centre devoted to creativity and exchange. 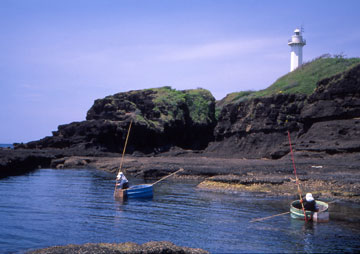 From the early 17th century, when one of the world’s richest gold mines was discovered, Sado Island served as a keystone in Japan’s economy and a vital stopover for the Kitamae ships that plied Japan’s coast stretching from Osaka to Hokkaido. These ships brought not only trade but a lively cultural infusion. 260 kilometres in circumference, Sado lies at the junction of warm currents from the south and cold from the north, making it both culturally and climatically like a microcosm of Japan as a whole.

Sado’s history includes the banishment of many notables, like Zeami – the founder of noh, Japan’s most sophisticated theatrical tradition. Sado’s status as a fife run directly by the national government also gave islanders the wherewithal to indulge themselves in the arts, as evidenced by over thirty noh theatres dotted throughout the island and by the not uncommon occurrence of farmers humming refrains from the noh repertoire as they work their fields. Together with its three genres of puppet theatre and a wealth of festivals held throughout the year, Sado has been referred to as a ‘floating treasure chest’ of traditional culture. Sado is not only favoured with lush mountain scenery encircled by the sea, It is also the last Japanese home of the severely endangered Japanese Crested Ibis (Nipponia Nippon). We consider it a blessing to live amidst such cultural and natural beauty, and treasure the immense contribution it makes to our own creativity.