There are three principal elements in the make-up of a Kodo performance.

The first are pieces based upon traditional folk arts, learned from local people throughout Japan. Our intention is not simply to replicate, but, in rearranging them for the stage, attempt to capture their universal spirit and energy as they filter through our bodies. Art rooted in the soil developed through an intimate relationship between the people and their art, and between art and nature. They are an irreplaceable treasure laden with hints for us denizens of a bewildering age. We would like as many people as possible to be challenged by the infinite possibilities they present.

The second element of our performance is made up of compositions of friends and mentors of Kodo. These include composers Maki Ishii and Shinichiro Ikebe, Kabuki orchestra musicians Roetsu Tosha and Kiyohiko Senba, and jazz pianist Yousuke Yamashita.

The third element consists of original compositions by Kodo members themselves, who have used their exposure to the rhythms and sounds of the many people and places they have been lucky enough to visit as grist for their own creations.

Our performance begins with the blending of these three elements with our lives amidst the sights and sounds of Sado Island. It is then forged into shape on the anvil of rehearsal. 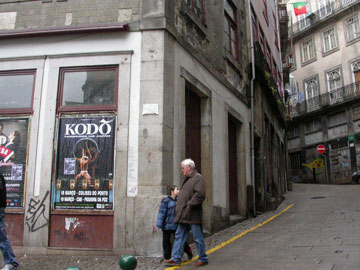 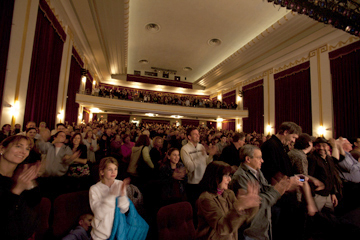 Since holding a six-month world tour in 1984, Kodo has been continually touring under the banner “One Earth Tour.” This theme embodies Kodo’s desire to transcend language and cultural boundaries and remind people of the common bond we all share as human beings.

Since 1999, in addition to our regular appearances, Kodo began holding School Workshop Performances, taking place mainly at junior high schools. The idea is to let students directly experience the taiko in the familiar surroundings of their school gym. School Workshop Performances that not only introduce Japan’s youth to the taiko, but also share the instrument’s potential as a venue for self-discovery. 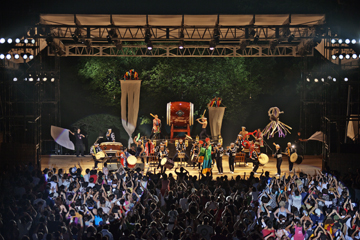 After bringing the sound of the taiko to the ears of the world for so many years, we wanted to create an environment where we could bring the sounds of the world back to Sado Island. Coinciding with the founding of Kodo Village in 1988 we held our first annual Earth Celebration. The theme was then, and remains, ‘Tataku’ (to Beat a Rhythm) – one of most fundamental human acts. Among the gathered artists, scholars and festival celebrants from around the world exchange takes place in countless ways at concerts, lectures, workshops, and ‘fringe’ events’ where regular festival-goers can get up and perform. Powered by the energy born of these celebrations, we then set out on further explorations of the globe.

More and more, Kodo members are pursuing opportunities to hold solo and small-group performances that give each player the opportunity to showcase his or her unique talents. Of course individuals also bring these experiences back to the group, thus broadening the collective range of expression for all Kodo members.

In 2006, our 25th Anniversary Year and a turning point in Kodo’s history, we began a new kind of tour called the “One Earth Caravan” (OEC) featuring a smaller unit that would be able to visit Central and South America, Africa, Eastern Europe and other less-frequented international destinations as well as Japan’s outer islands. This kind of tour perhaps gives deeper meaning to the “One Earth” concept behind Kodo’s travels. The OEC tours are held in tandem with Kodo’s other main activities but adopt a more experimental nature.