Kodo will celebrate its 40th anniversary in 2021!

In November 2020, we launched the “Kodo 40th Anniversary Concert Series.” Over the course of the next 18 months, Kodo will embark on domestic and international tours to share our group’s milestone celebrations with audiences far and wide. We look forward to bringing the past, present, and future of Kodo, the resounding sound of taiko, and the power of music, to people all over Japan and around the world.

As we celebrate our group’s 40th anniversary, we sincerely hope you will cheer Kodo on towards its 50th and 100th year milestones, too. We look forward to seeing you at a concert venue near you. 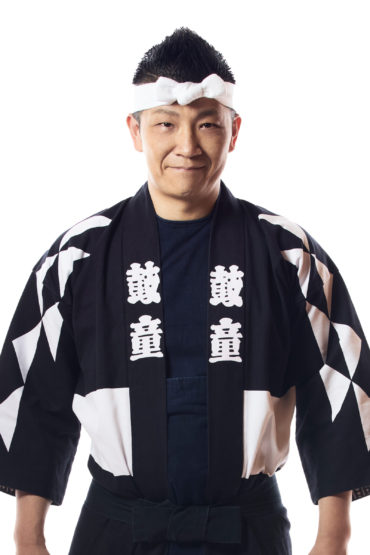 Like many of you, Kodo has been greatly impacted by the effects of the COVID-19 pandemic. In March 2020, our Europe Tour was suspended. Then I was forced to make many heart-wrenching decisions to cancel our upcoming performances. Even now, Kodo is still experiencing harsh times like never before.

However, those challenging months when we couldn’t hold performances gave us the opportunity to take a fresh look at our way of life. This situation led us to stop what we were doing and stay at our base on Sado Island, which gave each Kodo member time to study, think, and engage in creative activities here on the island. I strongly feel that the time we spent on Sado is currently fuelling the Kodo Group’s activities as we move forward.

In 2021, Kodo will celebrate its 40th anniversary. When you include the years of our antecedent group, Sado no Kuni Ondekoza, our history spans half a century. That’s 50 years of performing and traveling all over Japan and around the globe. We’re currently preparing a 40th anniversary concert series that we plan to share with audiences far and wide.

Kodo will harness all the power we’ve garnered to date to ensure we overcome this crisis situation. Our broad-ranging, deep connections with people worldwide are a precious asset that we will hand down to our next generation as we drive our mission forward.

Thank you in advance for your continued support. I sincerely hope you’ll help us celebrate 40 years of Kodo throughout the months ahead.

Kodo will mark its milestone year with performances of brand new works in Japan and abroad. 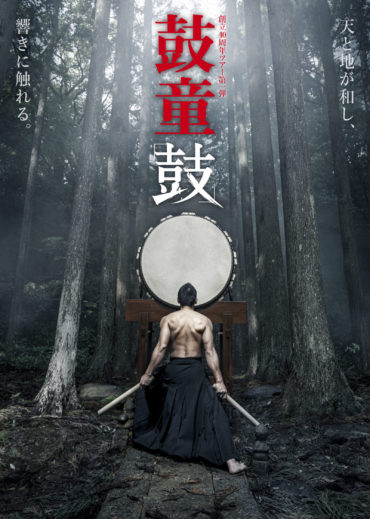 In our first commemorative work, Tsuzumi, we will perform Dyu-Ha on tour for the first time in around 15 years. The late Maki Ishii, a modern composer who was introduced to Kodo by conductor Seiji Ozawa, presented this piece to Kodo as a gift to congratulate our ensemble on its debut in 1981. Tsuzumi will also feature Ishii’s masterpiece Monochrome and other Kodo signature pieces such as O-daiko, Yatai-bayashi, and Zoku, coupled with new compositions. Join us as we trace our group’s origins back to the beginning, to reflect on our history and reaffirm what has shaped Kodo today. Tsuzumi will serve as a cornerstone for Kodo’s next ground-breaking chapter. 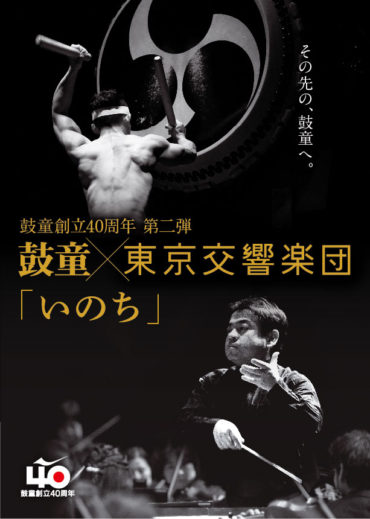 Our second commemorative work will be our first orchestra collaboration in five years. The programme will feature two pieces performed by Kodo and Tokyo Symphony Orchestra. One is brand new “Inochi,” meaning life or life force, which Kodo’s Ryotaro Leo Ikenaga composed especially for this concert. The other is “Mono-Prism,” the late Maki Ishii’s opus for taiko and orchestra, based on his composition and our signature piece, “Monochrome.” Combined, they will depict the culmination of Kodo’s four decades of history as the ensemble passes its lifework and way of life on to the next generation.

Join us for a one-off concert featuring Tokyo Symphony Orchestra and Tatsuya Shimono, one of Japan’s leading conductors and long-serving music advisor to the Kodo ensemble. 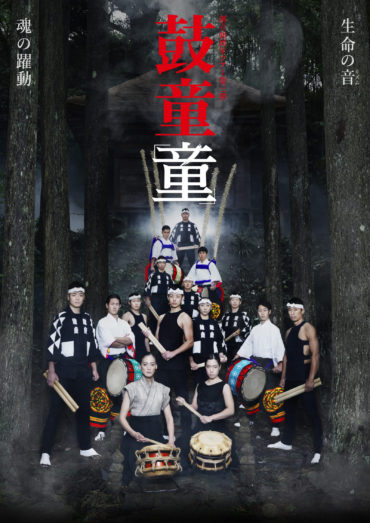 In Japanese, the word “Kodo” holds a double meaning. It can be translated as “heartbeat,” the primal source of all rhythm. However, our group’s name is written with different characters, which mean “drum” and “child.” This reflects Kodo’s desire to play the drums with the simple heart of a child. For our 40th anniversary, we created two works based on our name: “Tsuzumi” takes its name and theme from the drum character, and “Warabe” from the child element.

In “Warabe,” Kodo looks to its classic repertoire and aesthetics from the ensemble’s early days. This production blends simple forms of expression that celebrate the unique sound, resonance, and physicality synonymous with Kodo—forever children of the drum at heart.
Come and experience the soul-stirring rhythm of life firsthand. 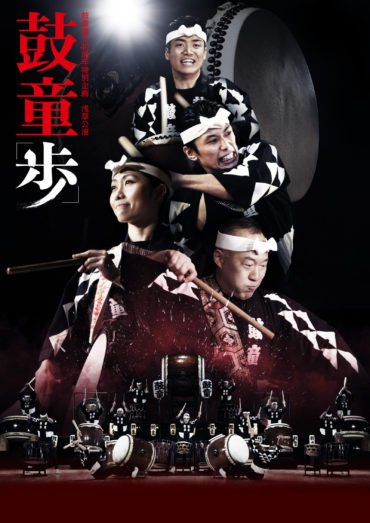 Every year, Kodo holds back-to-back concerts in Tokyo’s lively Asakusa, thanks to the enthusiastic support of its residents. While we had to stay away in 2020, we are thrilled to announce our return to this special area in 2021 to celebrate our 40th anniversary. For this occasion, we will present a new work created exclusively for Asakusa: “Ayumi,” directed by Yuta Sumiyoshi. We hope you will join us at Asakusa Kagekijo to experience the pulse of the town adding to the beats of our taiko. 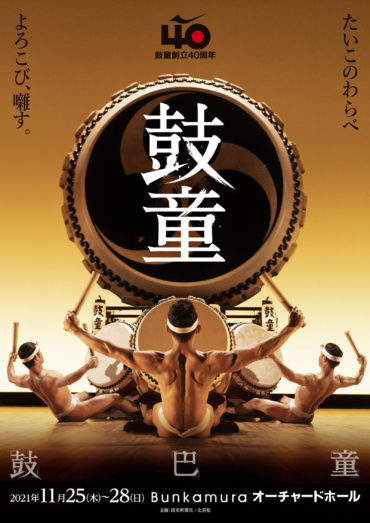 Kodo returns to Tokyo’s Orchard Hall with a concert directed by Kodo Ensemble Leader Yuichiro Funabashi.
This work will combine three programmes into one—the canceled 2020 Asakusa Performance “Tomoe,” and commemorative tour productions “Tsuzumi” and “Warabe.” Performed by a cast featuring the ensemble’s founding members, “Kodo 40th Anniversary Concert” promises to bring the depth and myriad layers of Kodo’s long history to the stage for all to enjoy.
This programme will only be performed at Orchard Hall. We hope you’ll come and celebrate our anniversary with us. 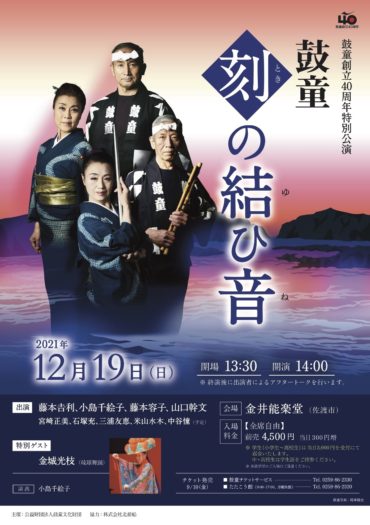 All four Kodo Distinguished Members were founders of the Kodo ensemble in 1981. These legends have led and supported our group for four decades together. In “Toki no Yui Ne,” they are joined by Kodo’s next generation and Okinawan dancer Mitsue Kinjo for a performance filled with gratitude for the people, bonds, and support that helped Kodo reach its 40th anniversary in 2021.

About the Kodo 40th Anniversary Logo

Our 40th anniversary logo features the symbolic top part of our English Kodo logo that depicts movement and growth. Our logo has traveled the globe with us to date, so by combining it with the number “40,” we want to express our history propelling us forward as we start our next chapter.