This blog was posted in Japanese on May 5. Due to stretched resources, the English version had to wait until now.
We are very happy to share this blog with you in English at long last.

Our dear friend Takashi Akamine passed away on March 18. I’m sharing this blog post on May 5, the forty-ninth day after he passed away, which is a significant day in Buddhist mourning rituals.

Takashi met Kodo in London during the first “One Earth Tour” in 1984. It was Hancho (Toshio Kawauchi) who noticed Takashi’s presence at the performance venue. Apparently, he said, “There was a Japanese person in the first row watching our performance with great excitement in his eyes.”

This is how Takashi himself recalls it.
“The first time I saw Kodo perform, I felt as if the sound of the taiko was dropping all the way down into the deepest part of my core with a resounding boom. As someone in a foreign country at the time, that sensation really jolted my identity. As soon as Yoshikazu got on stage and started beating the drums, the audience was drawn in at once. Even after O-daiko (the big drum solo) ended, I was so overwhelmed that I couldn’t even applaud.” (From Inochi Moyashite, Tatakeyo. – 30 Years of Kodo)

Kazuaki Tomida, who was a Kodo member at that time and on that tour, recalls having closed his eyes when he was playing the shamisen at Covent Garden. When he finished playing, he opened his eyes, and Takashi was there. 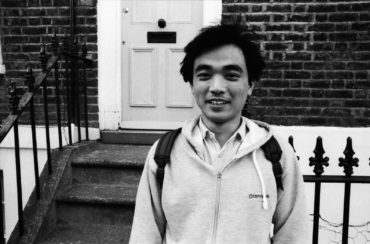 Takashi liked Kodo and his desire to work with Kodo grew stronger. After the performance, he met Hancho, whose first words to Takashi were, “When can you start (work)?”

Takashi came to Sado in January 1986.

Hancho was managing the negotiations for international tours by himself, but the anticipation that Takashi’s addition to the team would strengthen his work was short-lived. On January 1, 1987, Hancho had an unfortunate accident during his holiday in the Philippines and passed away.

While the team was grappling with devastating grief, the departure date for the North America tour was approaching.

The day before the tour was set to depart, Hancho’s funeral was held in his hometown, Tokyo. Takashi began his first job with Kodo as an overseas tour manager at a time when the survival of the group was on the line. 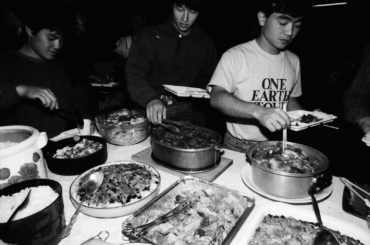 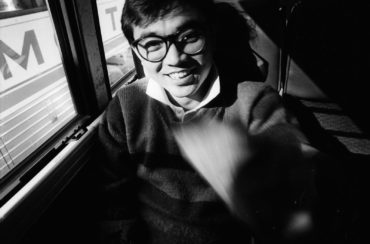 During the 1987 One Earth Tour (Photos: Kazuaki Tomita)

From then on, Takashi was a tour manager for Kodo’s domestic and international tours. He also had a range of other roles, including serving as staff for Kodo workshops and looking after the international guest artists at Earth Celebration. This continued until 2008 when he left his position at Kodo due to personal reasons. 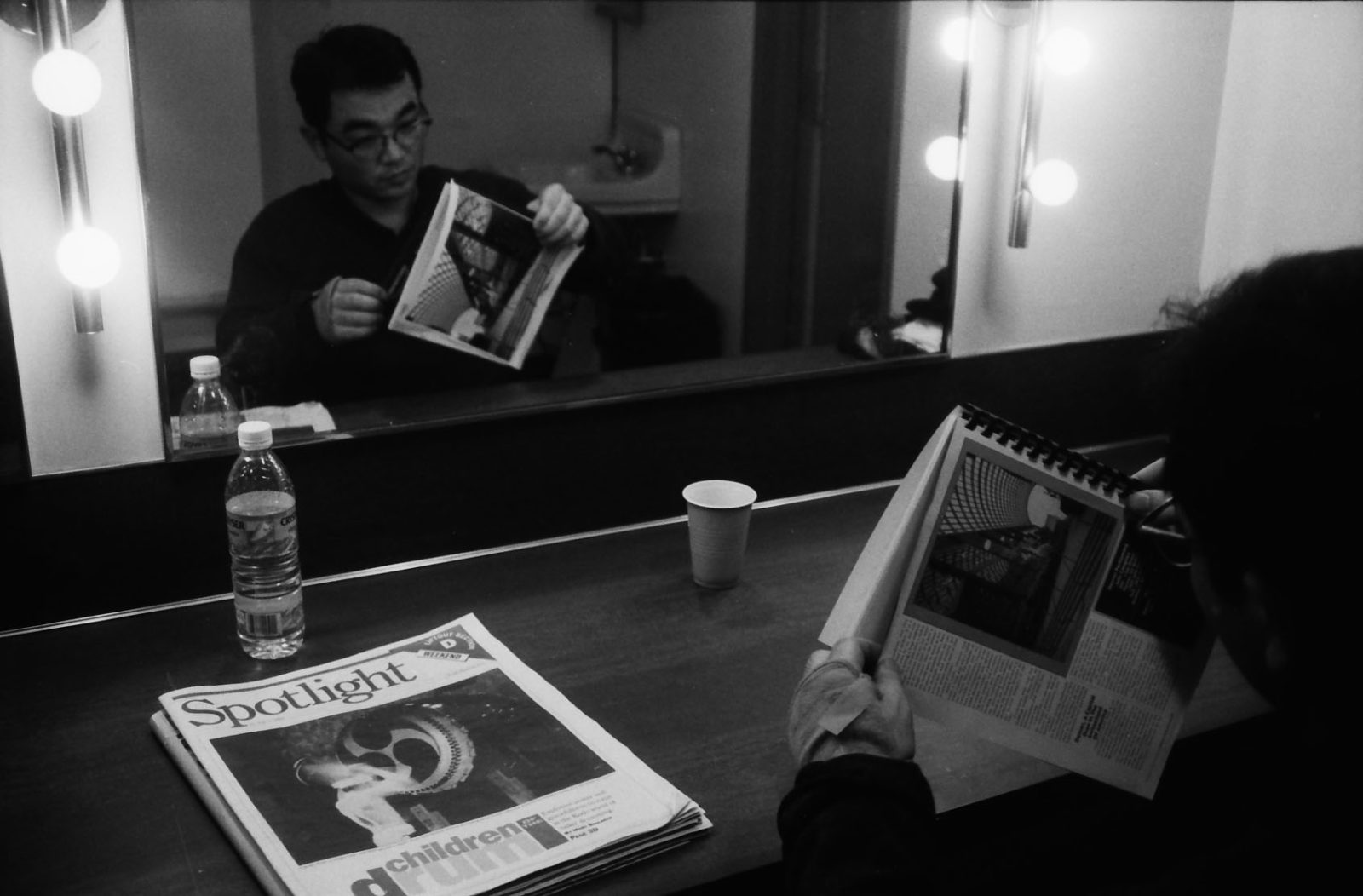 In his role as the group’s international tour advisor from 2010 onwards, Takashi mainly supported Kodo’s overseas performance activities. Throughout his career, Takashi constantly fostered connections between people with great sincerity.

I took this opportunity after he passed away to re-read the words that Takashi wrote for Kodo’s newsletters. His personality and his profound love for Kodo were flowing through his words. Takashi had fostered precious connections with people all over the world.

The Children of Tampa  From the June 1988 Issue

The children gave me the opportunity to reconsider and reaffirm the sensibilities that adults have almost lost.
During the tour, when we were in Tampa, Florida, some elementary school students came to watch Kodo’s performance. When I saw them, I noticed that there were children with disabilities within the group, and they blended into the group very naturally. They were not given priority admission into the venue, nor were they the last to come in. They came in holding hands with their friends. The children without disabilities did not hold any weird prejudices against the children with disabilities. They just chatted happily away as they helped each other, and it looked like it was the most natural thing for them to do.

After the performance, a visually-impaired girl came forward. With her tiny arms, she hugged the taiko closely to her little chest and pressed her cheek against the drumhead. I was slightly surprised by this. Her action was courageous and cute, and she looked bold and full of life. To her, this was a compelling desire. Touching. And confirming. I could also empathise with her earnest expression of this flow of consciousness. And a boy who was looking down and smiling shyly, reached out his hand to ask for a hand shake. I felt that his action was not a reflection of logic, but rather of his sparkling sensibilities.

The children of Tampa made me wonder how anyone could ever say anything unkind about vulnerable people. 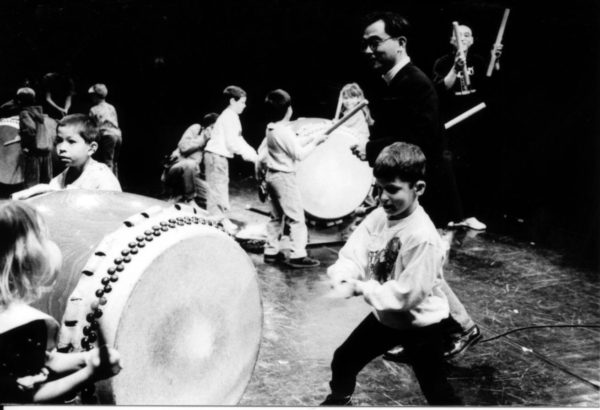 At a workshop held during the 1992 North America tour (Photo: Yasukazu Kano)

Holding Kodo Juku Overseas is Fun, Too! — Kodo Juku in Northern Ireland  From the December 1991 Issue

We conducted Kodo Juku in response to a request by a Japan Festival held in the UK.

The people who came from London had particularly high expectations, but we were able to match their enthusiasm with ours. That gave us a sense of reassurance somehow and we were able to run the workshops without feeling nervous. Afterwards, they even sent faxes to us on Sado to tell us they enjoyed it. Seeing their reaction after the experience, it seemed that the participants had a more fulfilling time than they expected. This delighted us, too.

What was so special about it? I think it was the human interaction. During performances, we always have a realm where there is a line separating the stage and the audience. We can’t speak to each other. But during the workshops, it’s fun because direct communication is possible. It really feels good. That was the biggest reason. 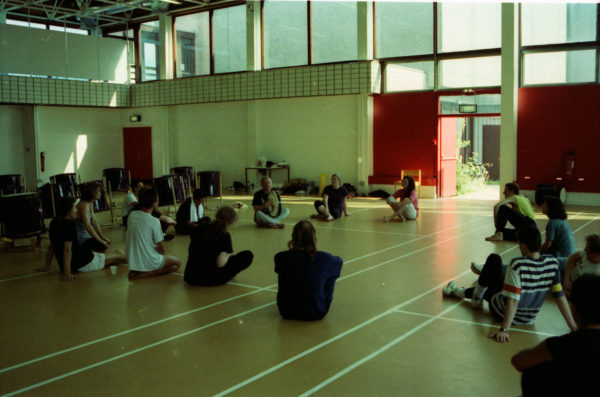 In a separate room, we also had a workshop using traditional Irish drums: the Bodhrán and the Lambeg. These two drums have a religious background, with one being Catholic and the other Protestant. Even now, conflicts about religion are still a big problem in the UK. When I asked them, “Do you sometimes play together?,” the reply was definite with a strong tone, “NEVER.” “Impossible.”

However, later there was a social get together for the participants, and the performers joined in, too. Not surprisingly, the two participant groups were just observing each other at the start, and they stayed as far apart as possible. But, as we casually asked them questions, both parties came closer and closer….
In the end, we even joined them to perform together. A performance they said was “impossible.”

Later, I heard it was described as “a historical event.”

This probably wouldn’t have happened if we had acted in a strange way or if we were nervous. I believe we were able to come together because we simply showed our interest in music. 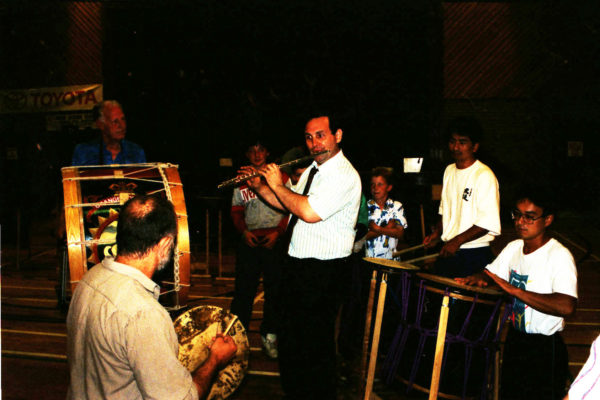 The historical jam session with Irish and Japanese drums. The big drum is the Lambeg (back), the small drum is the Bodhrán (front).

Every Kodo Juku  Conversation exert from the October 1998 Issue

Participants of various ages and backgrounds come from all over Japan, around the world in fact, for the sole purpose of playing taiko. One of the attractions of Kodo Juku is the opportunity to meet all kinds of people.

I think Kodo Juku is a rare opportunity for the Kodo apprentices, too. Let’s call it an occasion where they can hone their sincerity. When you cook, for instance, you prepare each dish wholeheartedly so that all the participants will thoroughly enjoy it. If someone asks or requests something, you respond to the best of your ability. This event gives them time to think long and hard about always putting your heart into the things you do and being grateful. Kodo Juku is a once-in-a-lifetime opportunity to turn your attention to those things. 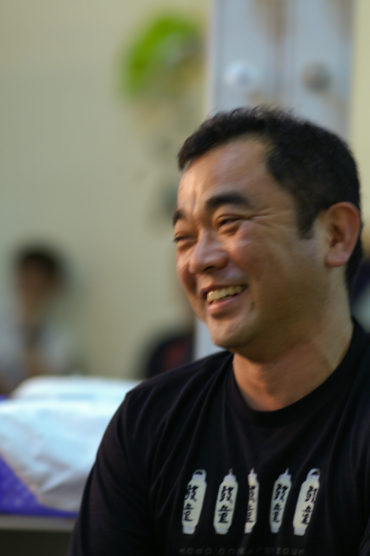 Personal Essay  From the June 2008 Issue

I’m in Okinawa now.
There’s an abundance of time in Okinawa. Of course, this is merely an illusion. Yet I can feel it in my skin, in my Okinawan DNA. It feels very good, and I’m rejoicing. When I have time, my thoughts flow to Kodo and Sado. When that happens, it occurs to me that Kodo and Sado have brought peace to my soul, and given me the energy and courage to live. I feel as if Kodo and Sado have become part of my identity, too. Kodo, Sado, Okinawa—I was able to discover my purpose and reason for being within these three elements.
Through Kodo, I was blessed with unforgettable encounters. Each of these encounters and events is flowing through my veins. I was truly happy for my 22 years at Kodo. I’ve gone on and on about personal matters, but this is the last thing I’ll say. Kodo is my treasure and my pride.

See you, everyone. Until we meet again. 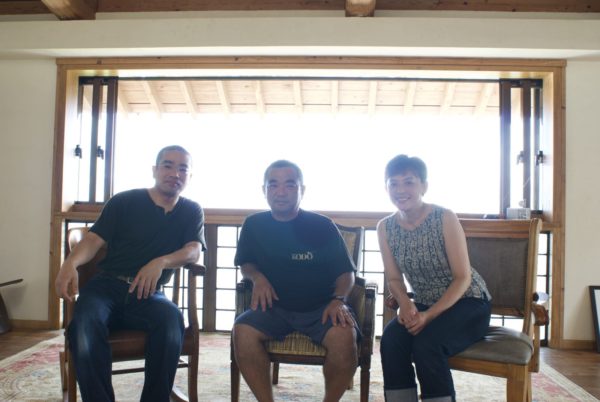 With Takuro and Junko Susaki on their visit to Okinawa, 2011