“The heart of Japan” is the theme of this special performance. Kodo will play taiko and other Japanese instruments including shamisen (Japanese banjo) and shakuhachi (vertical bamboo flute) to add rich Japanese sound to the six concerts in three major cities.
We hope you will come along to experience Sayuri Ishikawa’s world of song with Kodo’s unique accompaniment. 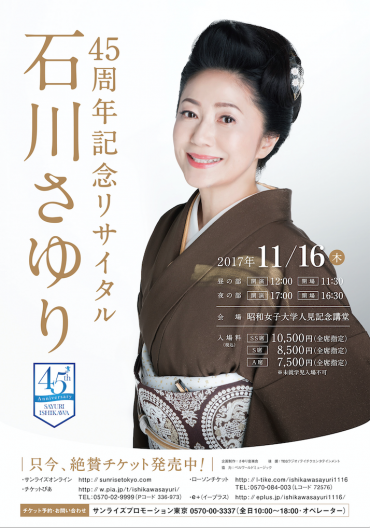 Sayuri Ishikawa is a singer who hails from Kumamoto Prefecture in Kyushu, Southern Japan. She made her debut in 1973 with single “Kakurenbo.” She received a Song Award at the 1977 Japan Record Awards for “Tsugaru Kaikyo-Fuyugeshiki” and made her first appearance on the iconic nationwide New-Year’s-Eve TV program “NHK Kōhaku Uta Gassen” (Red & White Year-End Song Festival) that same year. She continued to receive numerous awards, producing hit after hit such as “Noto Hanto,” “Amagi-goe,” “Kaze no Bon Koiuta,” “Whiskey ga O-suki Desho,” and more. While mainly performing at her own recitals, she also established a unique genre of “song-play” by fusing song and drama on stage. After garnering acclaim from every direction, she was presented with the 62nd Agency for Cultural Affairs Performing Arts Festival Grand Prize for her song-play “Kiga Kaikyo” (Starvation Strait). In later years, Ishikawa ventured into producing new music that was not bound by any genre. She released album “X-Cross II” in 2014, which earned her an Excellent Album Award at the 56th Japanese Record Awards. In July 2017, she unveiled her latest work, “X-CrossⅢ.”

“Kodo Sado Island Performances in Shukunegi” to Go Ahead, Refunds Offered to Residents of State of Emergency (SOE) and Semi-SOE Areas