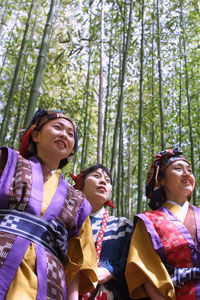 Hanayui is a song and dance group made up of Kodo members Chieko Kojima and Yoko Fujimoto joined by Okinawan dance expert Mitsue Kinjo. Finding themselves together on Sado, they decided to pool their talents and form a performing-arts group. In addition to performances at community centers, they also conduct workshops guaranteed to enliven both body and soul.

The Japanese word “hana” means “flower” and symbolizes the youthful energy that Hanayui puts into their performances. The word “yui” means “to tie,” and recalls the relationships formed in ancient villages in Japan when families came together to share in both hardships and harvests. Those who want to sing and dance with us, or who just have a good time watching, are all our “yui” friends. We hope you will become one too! 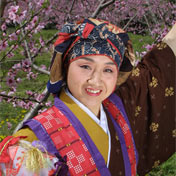 Born in Iwafune, Tochigi-prefecture, Chieko first encountered Japanese folk dancing when she joined Ondekoza in 1976. When Kodo was formed, Chieko carved out a niche for herself as one of the few regularly performing female members. She is noted for the original style of her dancing in Kodo’s taiko-based performance. Chieko enjoys expanding her repetoire and meeting new and stimulating people in her travels across the globe. 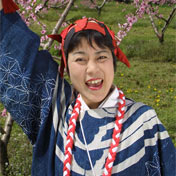 Yoko joined Ondekoza (later Kodo) in 1976. After three years appearing as a Koto player, singer and dancer, she stepped down from the stage to edit the monthly Japanese language newsletter ‘Kodo’ for the next 13 years. In 1989 she began to sing again and has been Kodo’s principal vocalist ever since. In 1996 she toured Cuba and North America with her husband Yoshikazu Fujimoto, Kodo’s principal O-daiko player, giving drum-and-song workshops. She also conducts ‘Voice Circle’ workshops which help participants to rediscover song and the power of their own voices. 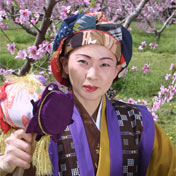 Okinawa-native Mitsue Kinjo entered the Okinawan dance troupe “Hana no Kai” in 1979 and was trained by Takako Sato. It was through her activities in Okinawan dance that Mitsue first encountered Kodo. Later, after receiving the Okinawa Times Highest Award for Achievement in the Performing Arts, Mitsue married a Kodo member and moved to Sado Island. Mitsue first participated in the Kodo Village Festival as a member of Hanayui, and has continued in to participate as a dancer in other capacities since.