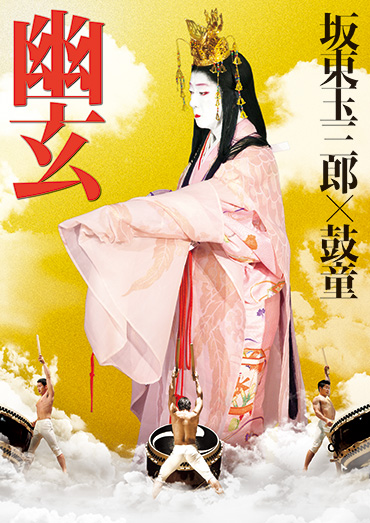 After four successful seasons of “Amaterasu” over the past decade, Kodo returns to the stage with Tamasaburo Bando in 2017 for a brand new collaborative work, Tamasaburo Bando x Kodo Special Performance “Yugen.” The world premiere at Tokyo’s Bunkamura Orchard Hall in May 2017 will launch a tour throughout Japan with performances in Tokyo, Niigata, Aichi, Fukuoka & Kyoto.

Kodo and Kabuki actor Tamasaburo Bando first met in 2000. In 2003, Bando directed the ensemble in “Kodo One Earth Tour Special.” In 2006, Kodo collaborated with Bando on stage for the first time in “Amaterasu.” This collaboration between the most celebrated Kabuki onnagata (male actor specializing in female roles) of our time and a preeminent Japanese taiko ensemble created a huge sensation. The debut season of “Amaterasu” soon led to an encore season in 2007 at Tokyo’s historical Kabukiza Theatre. In 2013, the legendary third season of “Amaterasu” welcomed sell-out audiences to all 67 performances in Tokyo, Fukuoka, and Kyoto.

For over fifteen years, Tamasaburo Bando has continued to revolutionize Kodo’s creative activities with his limitless imagination and exceptional aesthetic sense. The theme for the next Bando x Kodo collaboration is yugen, which means “subtle grace.” This work provides Kodo with a truly unique challenge: to use taiko to conjure the subtle yet profound world of Noh Theater with Tamasaburo Bando. “Yugen” will feature an array of classical Japanese images from plays by Noh founder Zeami, incorporating themes from iconic works such as “Hagoromo” (The Feather Robe), “Dojoji” (Dojo-ji Temple), and “Shakkyo” (The Stone Bridge).

Dynamic Kodo has led the taiko world for decades, remaining dedicated to taiko as a vibrant living art form. In “Yugen,” the ensemble will provide an innovative accompaniment for Tamasaburo Bando, whose elegant dancing prowess is often described as “unparalleled.” Furthermore, Bando and Kodo will be joined by special guest artists Jusuke Hanayagi and the Hanayagi-ryu Dancers, who will enhance the rich color of the new work. “Yugen” invites audiences on a journey to new horizons of expression and imagination; to a creative realm where Bando’s captivating dance, Kodo’s soul-stirring taiko, and exquisite music inspired by the world of Noh, all meld into one.