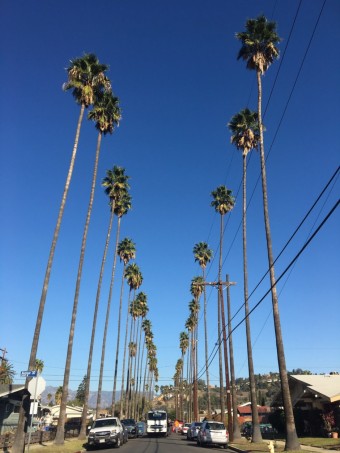 Hi, everyone! Today, I am reporting from Los Angeles, California.

I grew up in this sunny city up until I began working for Kodo, as one of the staff members who handles international projects.

I am currently back home to support the first portion of Yuta Sumiyoshi’s solo performances and workshops in the United States. 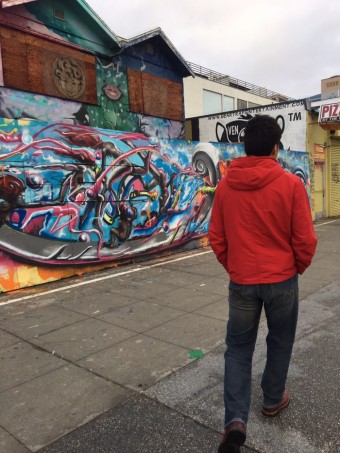 The United States have one of the largest taiko population outside of Japan, and the taiko culture that exists here is one of a kind.

Everyone who is affiliated with taiko is mostly connected through the taiko community, and we exchange new ideas and thoughts in full support of one another.

Today, I would like to talk about some of the American taiko culture that Yuta Sumiyoshi was able to experience during our time in Los Angeles. 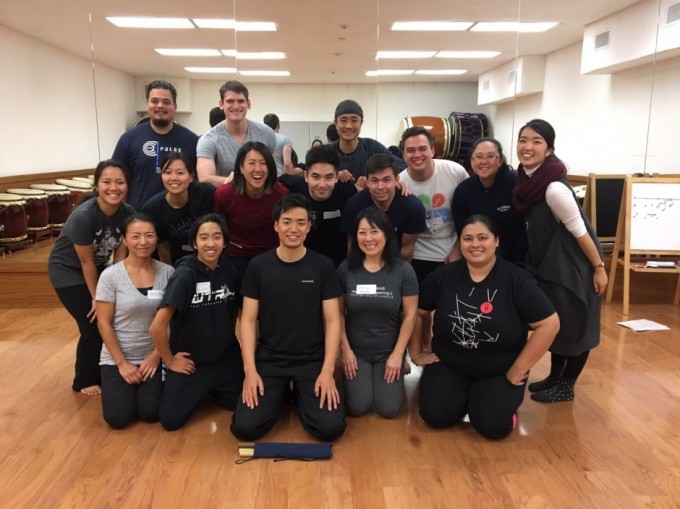 The first thing we did after flying in was an intensive workshop at the Los Angeles Taiko Institute inside Asano Taiko USA.

Despite the fact that it was Thanksgiving weekend, we had a full house for Yuta’s 5-hour workshop! 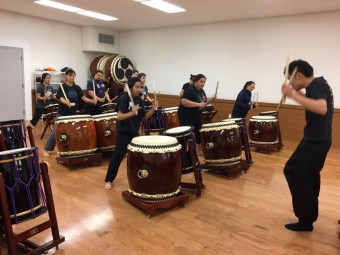 We had a wide range of age and experience levels, and everyone had a fun, challenging time!

This was Yuta’s first time conducting a workshop in the U.S., and he was able to utilize his English skills that he’s been working on. 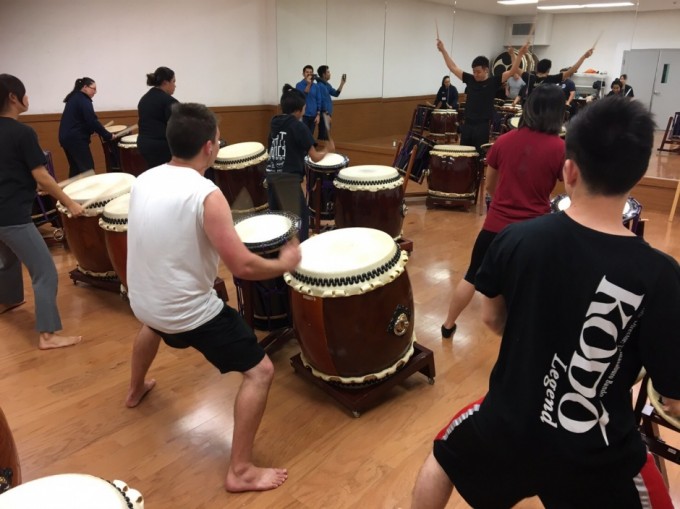 For this workshop, he taught on multi-drum set.

In America, shime taiko and okedo taiko are commonly used for a taiko set, but for this workshop, we used two drums with a closer tone to sing the rhythmic phrases, which may have led to some new discoveries for the participants. 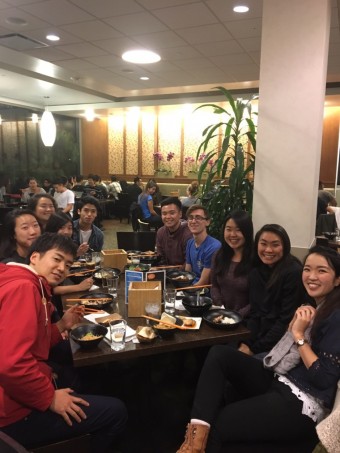 In the dining hall at UCLA

And I also want to tell you all about collegiate taiko as well!

The first ever collegiate group was formed in 1990 at my alma mater, UCLA, called Kyodo Taiko.

I believe that my current job at Kodo was made possible with what I gained through my collegiate taiko experience, and I was thrilled to be back to introduce one of our star performers, Yuta Sumiyoshi, for a workshop. 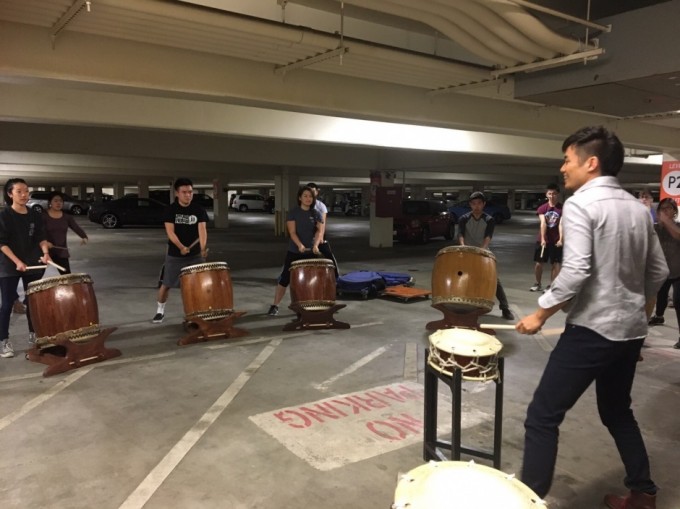 And of course the session was held in the parking structure of the university!

With so many active clubs on campus, it is always a challenge to find a good practice space that can accommodate the loud sound that the taiko makes.

Hearing the car alarms go off during the workshop reminded me of my college days practicing really hard all the time. 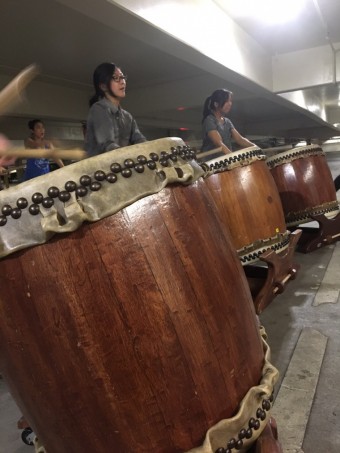 Many groups in the US plays on these taiko drums made out of wine barrels, beautifully refined for performance. 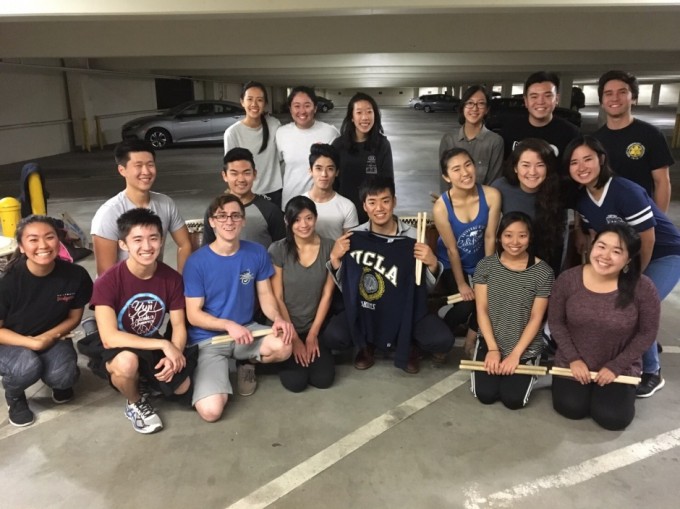 Not many collegiate taiko groups have the opportunity to learn from professionals in Japan, so I was excited to see everyone immersed in the workshop, and to hear them tell me, “That was the most fun I’ve had playing taiko in a very long time”.

Our time in Los Angeles will end with an exciting show which is already SOLD OUT! 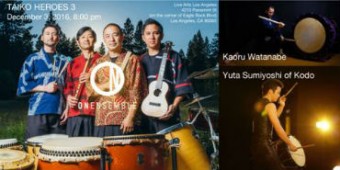 On Ensemble is one of the most respected ensembles in the world, recognized for infusing the powerful rhythms of taiko with a wide range of musical influences from jazz and rock. 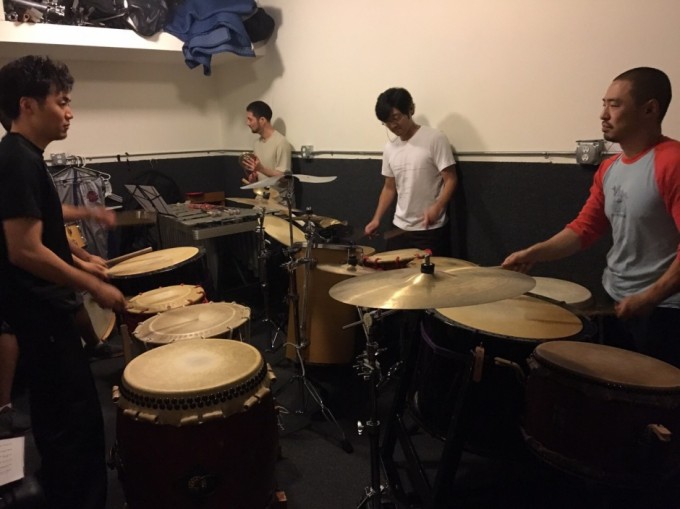 Joining On Ensemble is former Kodo performer Kaoru Watanabe from New York, to present new material from his album Néo, with Fumi Tanakadate, a multifaceted musician based in New York City, and our very own Yuta Sumiyoshi.

The complexity of the musical groove created by these musicians is like no other.

Several rehearsals have taken place so far in Los Angeles, and at last, the performance is tomorrow! 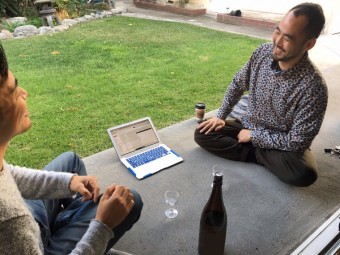 If you still want to check out what Yuta Sumiyoshi has been up to with his collaborations, he will also be in San Diego to guest appear in Kaoru Watanabe’s concert featuring his new album, Neo on December 5th!