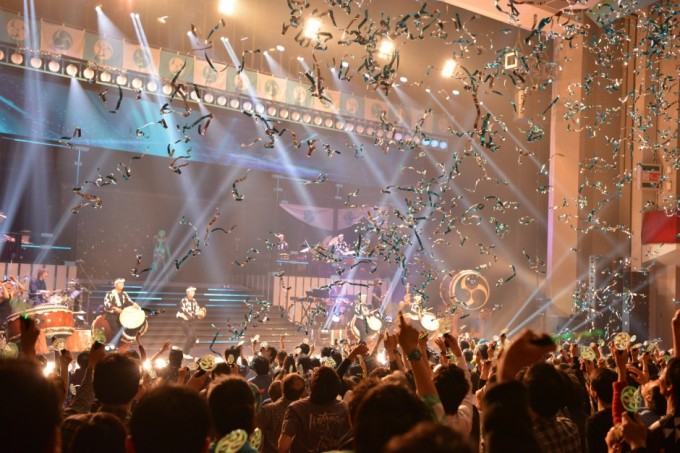 After six months of preparation, the day of the first performance was upon us.

We had worked with many people to create this production and we expected that the audience would to enjoy it. However, at the same time, we were also nervous to see how it would turn out.

When it was time for the performance to begin, a song began to play as the house lights went down, a track that we were told would let the audience know that the concert was about to begin. Excited cheers arose and all the bright concert penlights began to move about at once.

At that moment, I sensed a certain energy arise and penetrate through the curtain that separated the audience from the stage. As soon as I felt that sensation, my expectations and anxiety all vanished away, and I felt strangely invigorated.

My impression of Hatsune Miku back then was of a “world of songs” created by many individuals, known as vocaloid producers.

Numerous works have been created over the ten-year span since Hatsune Miku was “born” that harness her expressive powers, which are very human-like at times and exceed human powers of expression at others.
It seemed that the more Kodo’s members listened to their assigned song, the further they were drawn into Hatsune Miku’s world.

The next impression I recall is one that arose when I first looked at the information and video website I received when I asked what kind of live performance Hatsune Miku usually presents. She sings and dances on a screen in the middle of the stage, flanked on both sides by a dynamic band. And the audience goes crazy. The performances were really lively, but something didn’t quite make sense and seemed strange to me. It probably had a lot to do with the fact that I was watching it on a small screen, but if I have to try to put it into words… I guess I didn’t quite get how an audience could get so excited about an on-screen performance of this nature.

In early 2017, we welcomed Hatsune Miku’s band and staff to Sado Island for two days of rehearsals and I think that everyone was filled with joy to create new music and a new performance together. We wondered if we could add the broad range of rhythms and sounds of our taiko drums into the performance of Hatsune Miku’s precisely structured band. But despite it being their first meeting with Kodo, the band accepted the challenges posed by the Kodo members with such open minds. I always feel great joy in moments like these, when brand-new things are created.

Later, we had rehearsals at NHK Hall in Tokyo. We visited the hall when the crew had almost finished setting up all the stage equipment. They were right in the middle of fine-tuning a transparent screen in the middle of the stage. On either side there were two towering stages for our taiko. The whole stage was surrounded by LED panels and there were laser lights. too. While we have experience performing on a wide range of stages and in many different collaborations, I think this was Kodo’s first time to perform on a stage as customised as this. Thanks to the care and attention to detail of the staff, even though the situation was filled with firsts for us, the Kodo members were able to go through the entire rehearsal process without any stress. This was a true blessing.

At last, all the preparations were complete. All that remained was to wait for the performance time to roll around.

The curtain rose and the programme began with “BURNING,” followed by “Senbon Sakura.”
The audience kept on dynamically moving their penlights about and that strange feeling I had when I watched the video footage of Hatsune Miku past performances just drifted away.
I thought, “Oh, so they’re not cheering at a screen after all.” Instead, I felt that the whole audience was one of the elements that creates the broad, profound world of Hatsune Miku. Their presence was enveloping the entire stage right then and there.

The programme was like a continuous torrent of cute, energetic, enchanting song and dance by Hatsune Miku, Megurine Luka, and Kagamine Rin & Len. Surprisingly, “The World of Hatsune Miku” welcomed Kodo with ease and the passionate energy of this world endeavored to create a new world along with Kodo. As if swallowed by the “torrent,” the Kodo members rode that wave of energy and continued to perform with all their might.

All of a sudden, we had reached the last song, “Sakura no Ame.”
I was at the very back of the audience area, and by the end, I felt like I was on my way to becoming one of the small fragments that makes up “The World of Hatsune Miku,” too.

Kodo’s mission statement says that “under the theme ‘One Earth,’ Kodo brings the sound of the taiko to all corners of the globe as our music and message resonates with myriad cultures and ways of life.” Since Kodo formed in 1981, we have been supported by so many people as we continue to work towards that concept. During this live performance, I felt happy to experience a moment when I felt that we were indeed resonating “with myriad cultures and ways of life.”

As Kodo continues its activities, I really hope that Kodo will have another opportunity to leap into the world of Hatsune Miku to create and experience moments of happiness once more. And when that happens, I want to be there, too.
I am looking forward to it already.

After our performances with Hatsune Miku, we received more immediate online feedback from the audience than ever before. We thoroughly enjoyed reading through the many comments (in Japanese) shared on social media by people who came along.

I would like to take this opportunity to answer some of the FAQ I saw online following this collaboration.

In the piece “Mine no Kaze,” the long instrument played on the right-hand side of the stage (stage left) is called a “rain stick” or “rain maker.” It is a tube with a lot of thin spikes inside, and as you tilt it from side to side, the seeds inside it hit the spikes as they fall to the other end, producing a rain-like sound.
We received a lot of comments about the “chappa” cymbals played in “Remo(te) Con(trol).” The cymbals used in this piece are ones we call “jangara,” which are larger than chappa. The timbre is different due to the differences in diameter and thickness. For your information, and as a bit of a sales pitch, jangara are available at the Kodo Online Store. If you are interested in ordering a pair in English, please contact the Store by email.
By the way, Kodo used chappa to perform “Packaged.”

In the first performance, when “BURNING” began and the curtain rose, one of the Kodo members was surprised by all the moving pen lights and momentarily lost her sense of balance. This performance was full of firsts for us and this is just one of the various incidents we encountered.

We are truly delighted to see that you have shown such an interest in Kodo. We hope you will all come along to see us at a Kodo performance in future.

When you come along, please refrain from bringing penlights and spring onions.

We would like to also invite you to visit Kodo Online Store for Kodo CDs, DVDs, and more.

A list of all our albums is available on our discography and some of our works are available in Japan in high resolution via e-onkyo music.

While our cast was performing with Hatsune Miku in Tokyo, another Kodo cast was on tour in the USA. Here is a 360 degree video that was featured in the New York Times online, shot on stage in New York.
“A Thundering Drumbeat Like No Other” https://nyti.ms/2lplha3

We will miss Miku-chan’s voice if we don’t hear her anymore, so we arranged to have our own personal Hatsune Miku come to join us at Kodo Village. I don’t have the knack for this software yet, but I am looking forward to seeing what the Kodo members will come up with when they have the chance.