“Obon in the USA” by Yoko Fujimoto

Obon in the USA

This year I took part in some of the Obon festivities in the USA. I’d like to share some of my memories from that experience with you all. 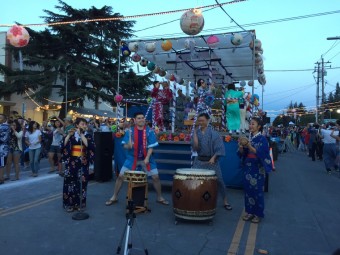 Some years ago, I think it was in 2001, I gave a present to San Jose Taiko in California: the melody and song lyrics for their taiko piece, “Ei Ja Nai Ka.” Then, people started to dance to that song at Obon, and this year it was chosen as the official music for Obon in California. When I heard that people were going to dance to it all over the state, I got so excited and decided to head over to the USA to witness the spectacle firsthand. 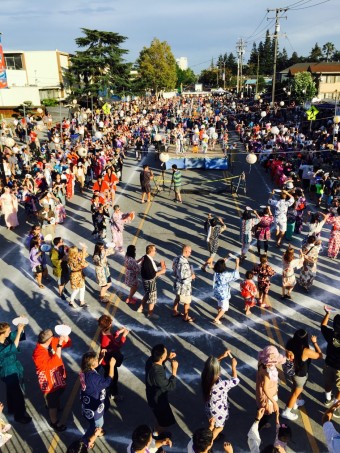 On July 11 & 12, I took part in San Jose’s Obon festival, which I had heard was the largest in the USA with 1000 people joining the dance circle each year. The turnout was even beyond my expectations! Volunteers from a local Buddhist church set up stalls selling foods, sundries, fans, toys and all kinds of things, and they really made the festival lively! In Japanese-American society, the Obon Festival is a ceremony when you remember your ancestors, as well as a time to reaffirm your connection with your community. It’s the most important family event of the year for many people. 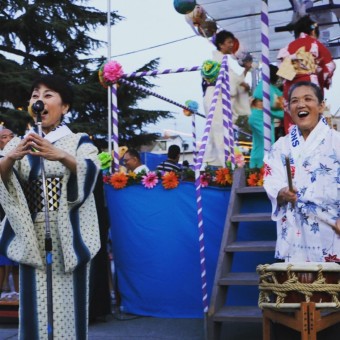 I sang surrounded by 1000 people dancing and it really filled me with strength. The call and response during the song was so powerful. It made me so happy and it was such an honor to join them all. 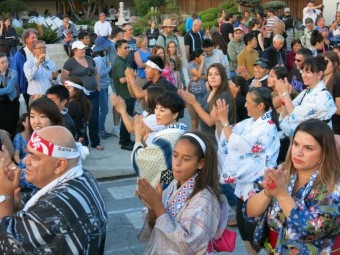 Many people came along wearing yukata (summer kimono) and some fun costumes also caught my eye. I was impressed right away by how international Obon is in America. The people there looked like they were all from different races, but despite appearances, apparently most of them have Japanese heritage.

The USA is a multicultural nation, and that’s why people have such a strong, deep awareness their own community. In Japan, people say we are “only Buddhist for funerals,” but people who go to Buddhist churches in the U.S. also have weddings there and it appears that their religion is more a part of their daily lives than it is in Japan. 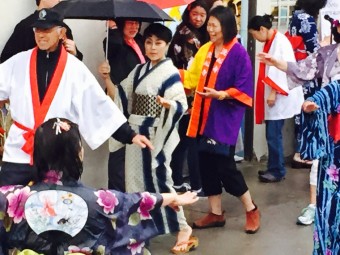 On July 18, I took part in the Obon festival in Venice, Los Angeles. Unfortunately, it rained that day. They decided to cancel it, but then changed their minds saying, “We can’t possibly cancel a festival that commemorates our ancestors!”
Luckily their enthusiasm and all the dancing eventually drove the rain away.
Races continue to blend more and more in society as time goes by. And this event continues to be a special occasion for people with Japanese heritage to think about their existence and give thanks to their ancestors.

Next year, I would like to come back for the Obon festival held by Senshin Buddhist Temple in L.A. They don’t set up stalls or the like, they just dedicate their efforts to holding a memorial ceremony for their ancestors. I hope I can make it.