Our “Mystery” North America tour is going along well.

To tour and hold performances requires dedicated work by so many key people behind the scenes. On this tour, one of them is Mr. Martin Lechner, our lighting director. We affectionately call him “Martin.” He is a tall like a big bear.

One performance day, I thought I could smell something good… and it turned out that Martin was cooking meat and sausages! He made hotdogs and hamburgers for us! They were so delicious, fresh off the grill! 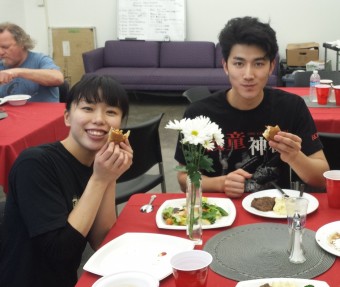 We’ll use this BBQ fuel as energy for our upcoming performances!