I wish you all the best for the year ahead and thank you in advance for your support.

So, how did you all spend your New Year’s?

I went to Yunotsu in Shimane Prefecture to study Iwami Kagura (Iwami: a region, the west part of Shimane Prefecture/ Kagura: dance and music for the kami, or deities) with some of my fellow Kodo members. Our group, including a couple of new members, will perform the serpent dance Orochi featured in “Kodo One Earth Tour 2015: Mystery,” on the North American Tour that starts on January 28. 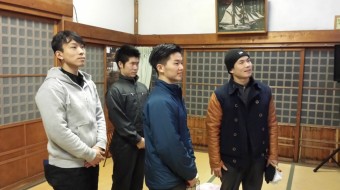 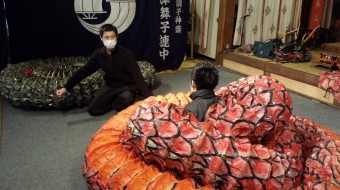 We were taught by Mr. Taizo Kobayashi and other members Yunotsu Maiko Renchu, a group of local performers that uphold Iwami Kagura in Yunotsu. Mr. Kobayashi is one of members who had helped us to create the programme for “Mystery,” who is an Iwami Kagura performer and a craftsman who carves masks. Mr. Kobayashi made the heads of all the serpents we use on stage for our “Mystery” performances. 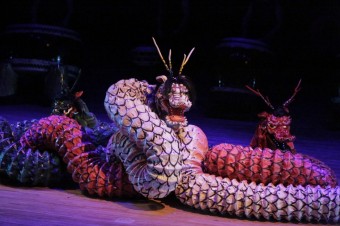 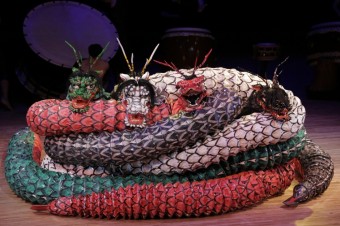 During this visit, our lessons were mainly for the new members who will join this programme for the first time. They were taught to make very detailed movements so that the heads and bodies would move smoothly and they learned how to move so that the serpents would look real on stage. I also learned many new things. I can now see that while Iwami Kagura looks simple, it is performed with really well-refined movements. 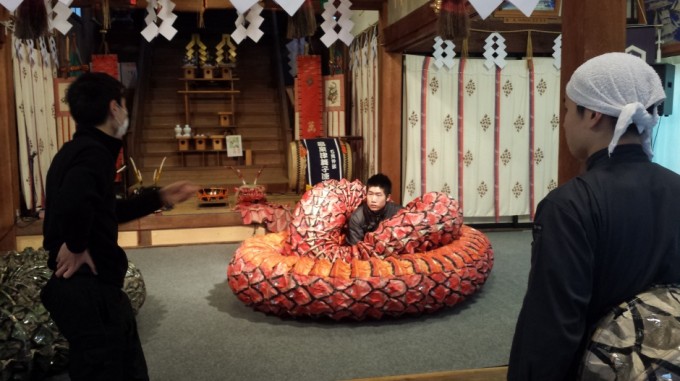 During these rehearsals, one of our missions was to take part in the local evening Kagura performance as serpents. This is a regular performance for Yunotsu Maiko Renchu, which is held at the Tatsuno-gozen Shrine every Saturday night. I was also fortunate enough to take part in this performance when I first came to learn Iwami Kagura here two years ago. 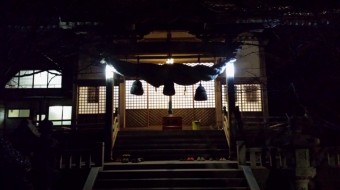 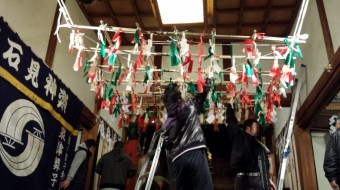 On Saturday evening, the shrine was decorated in preparation for the performance and I found it really moving to see both the space and atmosphere get ready for Iwami Kagura. I caught a glimpse of the relationship between the Iwami locals and the gods at this sacred place, which has close proximity to the gods. The people there also feel very close to the gods, while showing reverence and respect to them. This was the first evening Kagura performance for 2015, and once a special canopy was hung up to welcome the gods, they were ready for the peformance. 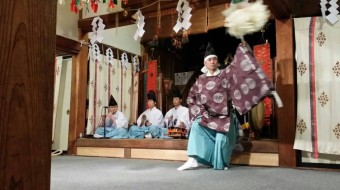 This time, as well as performing in the serpent dance Orochi, we also joined in to play the accompaniment for the shio-harai (salt purification) segment, which cleanses the performance venue. Mr. Kobayashi danced and we somehow managed to play the music to accompany him, although it was extremely difficult for us. 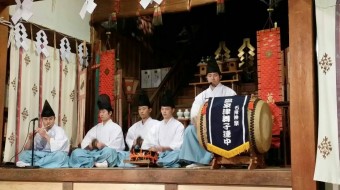 I think that great thing about playing a musical accompaniment that you have the power to encourage the people who hear the music to dance, move, and sing. Iwami Kagura has been passed for several centuries, so the music has developed over its long history to fascinate the audience and inspire the performers. I hope to become a taiko player who makes people feel thrilled and excited in such a way. 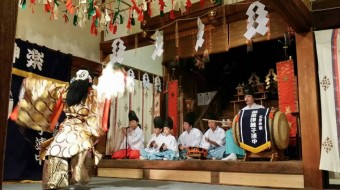 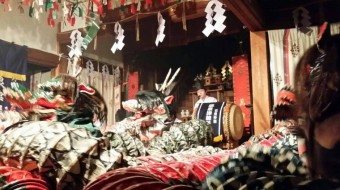 The last piece on the programme was the serpent dance, Orochi. The story goes like this: On his travels all over Japan, a god called Susano’o happens upon grief-stricken parents and their daughter by the Ibi River in Izumo, Shimane. Their grief is caused by a large serpent who comes to eat their daughters every year, and now they only have one daughter left. Susano’o says he will kill the serpent for them, on the condition that he receives their remaining daughter’s hand in marriage. And then he successfully kills the serpent. 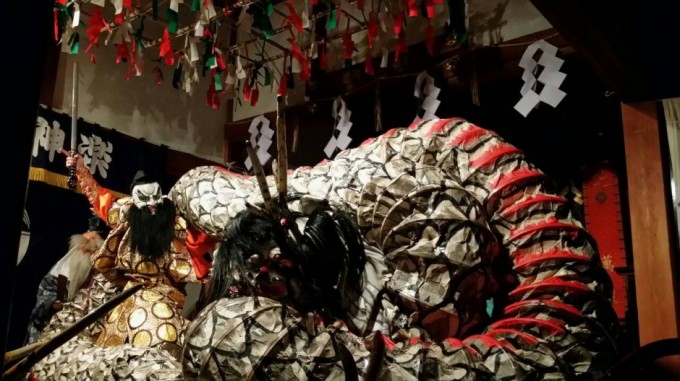 I first performed the role of the serpent in the spring of 2013, and this January was the second time for me to portray it in Yunotsu. It went so quickly, like the first time, but I felt I did it better than last time by making sure I took care with each and every movement and expression. Next time, when I visit them again, I hope to do much better. 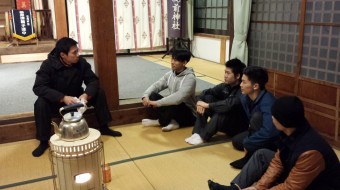 Mr. Kobayashi often talks to us during the rehearsals, before the performances, and in other interludes.

He says, “Tetsumi, it takes time to make good things.”

It certainly does take a lot of time to create art and performing arts that make us say “Wow!,” like Iwami Kagura. That time shows one’s desire to make something better, through both trial and error and the act of making an effort every day. That is why those performances and arts move and fascinate people. 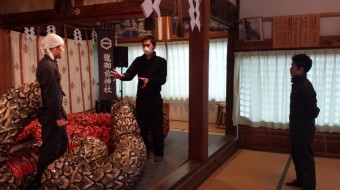 Also, Mr. Kobayashi always says, “Do something, even something completely ordinary, every single day with care.”
There are many things that we do every day that we aren’t doing properly, like greeting people, lining up our shoes neatly, or being grateful…
Everyone is different, so what seems “normal” to one person may be different for someone else. But, I think that by doing ordinary things properly, or with care, the repetition of our efforts will show in our performances and make them better. Even if it doesn’t relate to our performance directly, the culmination of this effort does become very useful. I’m not just a performer, after all, I am a human being. So I want to focus on my own heart and actions as a person, foremost, every day. 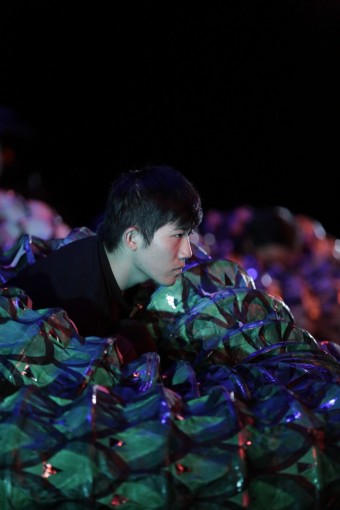 Our tour in North America begins next week. I will do my best to share Kodo’s performance, Japanese taiko, and traditional Japanese performing arts with everyone who comes to see us in Canada and the U.S.A!