I first recorded the songs with no accompaniment and sent them to Shunsuke Kimura who laid down the accompaniment. He played fue (bamboo flute) and some Japanese percussion, and added other musicians on Tsugaru shamisen, wadaiko, 13 and 17 string kotos, world music percussion and violin. 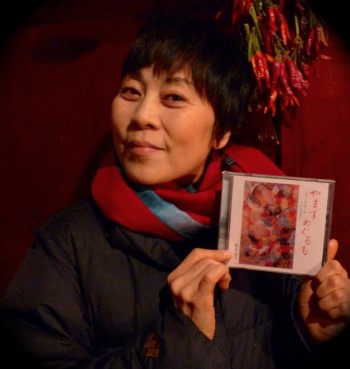 The first song on the album is called ‘Pinwheels’ and is a Japanese kindergarten song from the Meiji Period (1868-1912). The lyrics tell how a pinwheel spins endlessly when the wind blows, a waterwheel turns endlessly when the water flows.  I took the title for the album from this song. The second song, ‘Ororo Pinne’is an Ainu (Japanese aboriginal) song about the creatures of the forest. In the middle of the piece I do some free voicing. The words are in the Ainu language. When I was at the lowest point in my life I used to go to Sobama Beach here on Sado and hum this tune.  So that is why this song is so significant to me, as if this ancient song awoke me from a slumber.

The third number, ‘A Child’s Flower Song’ is based on a poem written by a Sado farmer to which I put music. When he was little he loved ‘playing house’ with his older sisters.  I was so impressed with it I asked his permission to turn it into a song. In his poem the children form Sado of about 70 years ago come to life.

The fourth song which I entitled Martina’s Lullaby is the traditional Bolognese lullaby sung by the little girl at the end of the movie I told you about.

The next song is called ‘Stars and Dandelions’. The words are a poem written by a Japanese poet Misuzu Kaneko (1903-1930) to which I set music. It says that you can’t see the stars in the sky in the daytime, but you can in the dark. They are there even when you can’t see them. A dandelion sheds its seeds and withers in the Fall but over the winter they are hiding beneath the roof tiles, waiting to emerge with the coming of Spring. She is singing about life, which has a beauty and power that you can’t always see.

The next number is the ‘Harvest Song’, a Taiwanese aboriginal song for which I wrote Japanese lyrics. It’s about the straightforward joy of harvest.

The last piece is called ‘Hinei Ma Tov’ and is a Jewish sacred song. ‘Welcome! Welcome! It’s such a beautiful day, Let’s sing!’ I loved that meaning so I made some Japanese lyrics for it. Whenever I do a voice workshop I finish up with us all singing this. It’s a song about the happiness of being able to spend this time together.

This CD is produced by Sanya Projects, which is the umbrella name under which from now on all my solo activities will occur. The Tibetan word Sanya (Śūnyatā in Sanskrit) means Nothingness.

No matter what nationality, race or creed there is a connection at the root of human hearts. I believe that songs born from that root resonate within the hearts of people, no matter what their differences. I have chosen songs about that unbroken cycle of relationships and life from which I have learned, and been given strength. 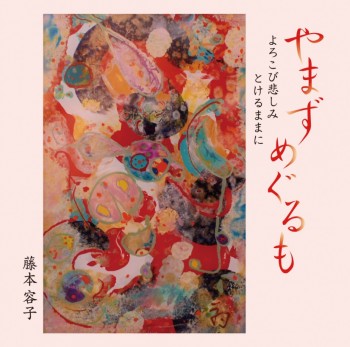