Melanie Taylor, who looks after Kodo’s translation and English public relations, toured internationally with Kodo from 2008 – 2012. She was one of the company managers on “Kodo One Earth Tour 2009: ekkyo – transborder,” which gave performances in ten countries around Europe from May through July 2009. Here are some of her memories from Kodo’s 2009 experience performing at Lyon’s long-running festival “Les Nuits de Fourvière,” where Kodo “DADAN” will perform later this month.

Kodo visited Lyon, France, in June 2009 during its rare overseas summer “One Earth Tour” to perform at festival “Les Nuits de Fourvière.” It was a little over halfway through our 9-week-long tour , and we had performed at a range of theaters, including magnificent concert halls in Rome, London, and Munich; a 5000-seat sports stadium in Zagreb, a 4000-seat outdoor amphitheater in Istanbul… so we were ready for anything. But the ancient Roman theater at Fourvière was unforgettable and the festival and its audiences stand out for me as a highlight of that tour.

It was the first time for Kodo to perform in Lyon and we arrived the day before our own performances. We were invited to watch “West Side Story” at the same theater that we would perform at for the next two nights. The summer heat and the late sunset meant that the performances, both theirs and ours at least, started at 9:30pm, which meant the sun would set during the performance. We entered the Roman amphitheater and I remember being amazed by the massive size of the arena and the history of the place. Coming from New Zealand, where we have trees older than any buildings, anything ancient and man-made really has an extra impact on me. We heard that it was the first time for the cast of “West Side Story” to perform outdoors, and this stage had three memorable features, or challenges: Roman relics on stage (which could not be covered up or moved or touched), wind, and a collaboration of stage lighting and natural lightning. As we watched, props and costumes moved in the breeze, which ranged from gentle to invigorating and actually moving small stage items about. The temperature changed as the sun went down and the moon rose during the performance. At the end of the performance, the audience was on its feet applauding the finale of six shows of the beloved musical and people threw cushions, borrowed for comfort on the stone seating, at the stage and performers in a whirlwind of color. It was like the sumo in Japan, but from such steep seating, the cushions flew at great speed as they hurtled towards the cast and it created even more excitement as they hit the stage and people in the VIP seating.

Les Nuits de Fourvière has been an annual event since 1946, so we were not only impressed by the history of the venue but also the history of the festival. The hospitality and the professionalism of all the staff and technical crew were just superb and we felt instantly at home, almost as if we were at our own festival “Earth Celebration.” It was a wonderful feeling to find in France, in a foreign city halfway around the world from Japan.

The next day, we arrived at the theater to set up for our own performances. The path from the stage to the lighting booth was very steep, and the performers had to really look up rather than out at the audience. They shared the stage with the ancient stone relics, our wooden drums looking smaller than usual beside the massive columns, but there was more than enough space for our large cast and instruments, including our biggest drum and cart.

In Japan, we usually perform at around 7pm, so the 9:30pm start was late for us, the latest on this tour in fact. The performers still ate dinner at around 5pm, keeping close to their normal routine, and the delicious catering certainly helped to maintain our appetites in the heat. The sun poured on the stage during the day so everyone warmed up in hats and the performers were careful not to overheat in the summer sun.

I took these photos on the first night. You can see how high up the lighting booth was and get an idea of just how many people the amphitheater can seat. From the higher parts of the theater, you have amazing views over the city to the horizon. The relics and the sky only added to our artistic direction. Also, the seating seemed to create a funnel of energy that connected the stage and the audience, with the electric air and sound of taiko echoing off the ancient stone structures and creating such enveloping reverberations.

In a theater, we are used to darkness and then our own creative lighting, but here the collaboration from Mother Nature and the historical site made for a really unique atmosphere. Our lighting was set up and operated as usual, and our performance began in the summer evening light. As our performance progressed, the sun set little by little and the darkness on stage grew so the baton was passed from nature to technician and we directed the light completely for the remainder of the performance. To me, it felt that as the evening got darker, our audience got closer and closer to the stage and the performance built and built towards the O-daiko, climax. (See the end of this story for video footage of Tomohiro Mitome’s O-daiko performance at Fourvière)

The performers came off the stage on the first night absoluting buzzing. The sound of our taiko had certainly caused a sensation and cushions has rained onto the stage. Kodo’s performance suited the venue so well, using both natural acoustics and a little push from the speakers.

Although some of the audience were wearing jackets in the evening… our performers drummed their hearts out and needed to ice their muscles as usual afterwards.

We returned to our dressing rooms and offices immediately afterwards to find a surprise on each of our desks and dressing tables: a beautiful bottle of French wine and a red rose, with a card from the festival. This festival reminded us all about how going the extra mile, adding a touch of kindness, providing an element of surprise, and offering warm hospitality move people easily yet so profoundly. 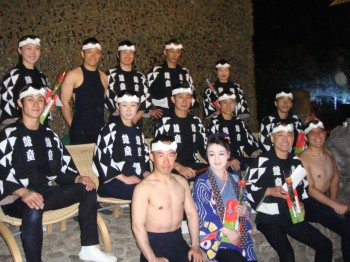 When I heard that Kodo had been invited back to perform at Les Nuits de Fourviere this year, this time presenting “DADAN,” wonderful memories flooded back to me of our first experience at the festival and I am filled with anticipation for their experience there this time.

It’s a festival that still has a special place in my heart. First impressions last and mine, as both an audience member for “West Side Story” and a staff member for the two Kodo performances, have made me want to visit this festival again at any opportunity, for work or pleasure because they were both unforgettable. The programming is so varied and the venue is so historic that each performance surely creates new worlds as the artists collaborate with history (the setting) and today (the audience) simultaneously. I highly recommend going there to enjoy the concerts or performing there as an artist.

And so, later this month, my colleagues with head to Lyon for DADAN.
I hope you’ll go along, and if you can, stay a while so you can see some other performances there. If you saw us there in 2009, throw an extra cushion at Yuichiro and Yosuke: it’s their second time there so they’ll be ready to catch them this time for sure.

For more on DADAN from me, please have a look at my report from Kodo eNews in 2012.