“Collaborations on Sado with ‘Tomoro'” by Chieko Kojima

Hello, everyone! How are you?

This year it is Kodo’s 35th anniversary. Over the years our company has broadened its activities to encompass a wide range of performances. Since the days of Sado no Kuni Ondekoza, I have been a dancer surrounded by taiko players. I think I was able to maintain this position within the group thanks to the feel-good surroundings here on Sado Island. Nothing compares to the pleasure I get from performing on Sado Island. 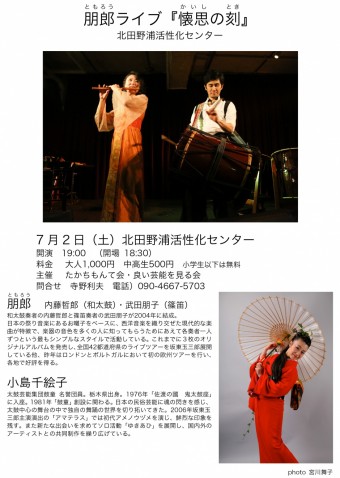 I have some news. Former Kodo member Tetsuro Naito, who composed iconic Kodo pieces such as “Shake,” “Nanafushi” and “Itsuka Mata” (until next time) while he was with our group, and former Kodo apprentice Tomoko Takeda, who plays bamboo flutes, now perform as a duo called “Tomoro.”
This weekend, they will return to Sado Island for performances from July 2 through 6. While Tetsuro was a member of Kodo, he captivated audiences with his unique world of sound and these performances also promise to be unique and dramatic.

One of the concerts has been organized by the people of Kita-Taura, the village where the Kodo Apprentice Centre was located back when Tetsuro was an apprentice. 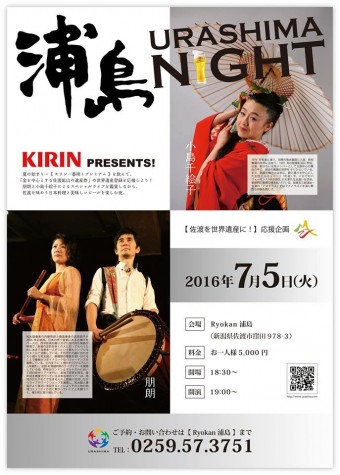 Another performance will be held at a Japanese inn in Sawata called Urashima. It will be a dinner performance with a creative Sado-themed menu.
Then there will be two performances at Hiyoriyama, a cafe in Ogi that many people visited last year during EC for the Kiyohime photo exhibition. So we have a mini tour on Sado Island from North to South. I say “we” because I am going to join them and I will collaborate with them at every concert! 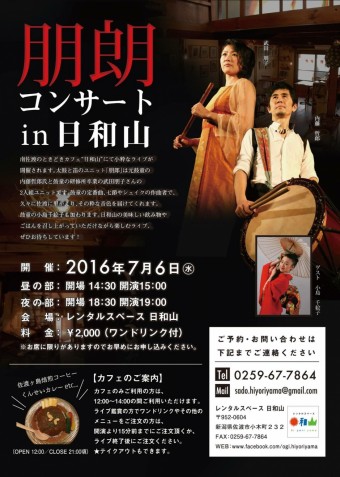 I am so excited to encounter the sound of Tomoro here on Sado again. After the performances on Sado, we will head to Joetsu for a Yukiai concert. We look forward to seeing you soon at these four special locations.