About Fundraising for Urahama Folk Performing Arts Center (in Japanese)

Please donate to the Urahama Folk Performing Arts Center Construction Fund and help build a new base for the folk arts in an area affected by the Tohoku Pacific Earthquake.

Urahama Nenbutsu Kenbai (sword dance) and  Urahama Shishi Odori (deer dance), two traditional performing arts upheld in the Okirai area of Sanriku in Ofunato City, were seriously affected by the damaging 2011 Tohoku Pacific Earthquake. The equipment for Shishi Odori barely remained, but all the equipment and the base for Nenbutsu Kenbai was lost. Even though they have kept their spirits up, it must have been hard for the people there to see a way forward through this dark situation these past three years. 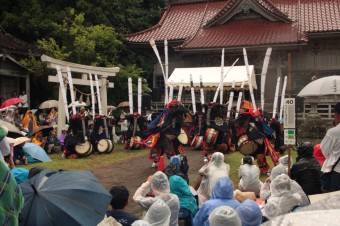 Last January, the people of Urahama decided to build a folk performing arts center as a base for their traditional performing arts. This facility is their pledge to hand the wonderful regional folk arts, which cultivate their area, down to future generations: it is their vow to not be beaten by the disaster. They have great confidence in the power of traditional folk arts and they are working hard and enthusiastically, encouraging people involved with folk arts in other areas to follow their lead. 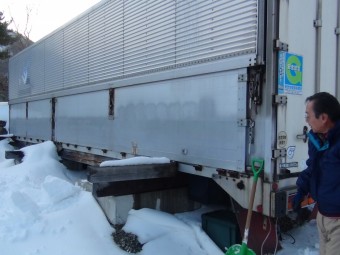 Their base was washed away by the tsunami, so they had to keep their equipment in a storage container next to the leader’s house. (Photo from Feb. 2014) 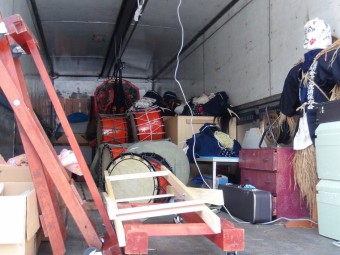 All the equipment is currently kept in an unsuitable environment. The new building needs to be built as soon as possible.

The Center will be built using personal funds and grants, and also requires 10,000,000 yen in donations to make up the remainder. From January to May, they collected more than half of this amount, but they still need 3,000,000 yen to reach their goal. They are almost there!

The basic amount they are requesting for bank donations is 10,000 yen or more. By donating this amount, your name will be displayed in the Center when it is completed. Kodo has put collection boxes in the exhibition corner at Asakusa Public Hall during the “Mystery” performances, which welcome donations large or small. Thank you in advance for your kind support.

Under the Heartbeat Project, Kodo is supporting the fundraising campaign to build the Urahama Folk Performing Arts Center. We would really appreciate your support and generosity.