I’m in Osaka with the rest of the Kodo cast and crew for our collaboration with the Osaka Philharmonic Orchestra. We are going to perform Maki Ishii’s Mono-Prism under their conductor, Michiyoshi Inoue. It has been 6 years since Kodo last performed Mono-Prism, which was in Rome, Italy, and 22 years since Kodo last performed it in Osaka. It will be my very first time. 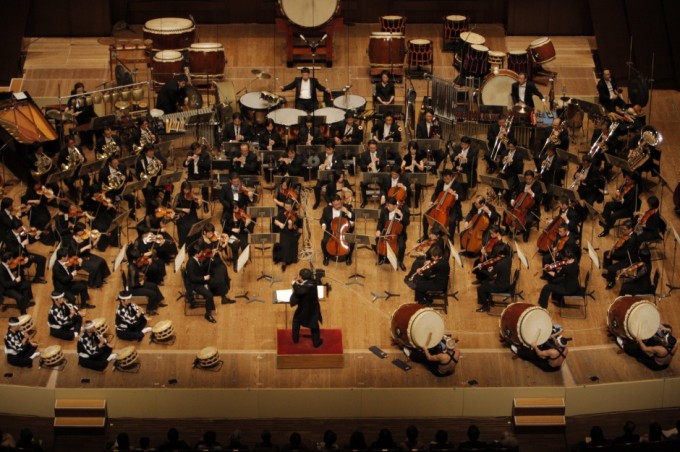 As I’m sure many of you know, composer Maki Ishii’s piece Mono-Prism has a subtitle “for Japanese drums and orchestra,” and he based the taiko piece (now a “Kodo classic”) Monochrome on this taiko & orchestra piece.

Maki Ishii also composed Dyu-Ha and ballet suite Kaguyahime, which Kodo has performed countless times. Mono-Prism is a crucial part of Kodo’s history: it was debuted by Kodo’s antecedent group Ondezoka, then performed at Kodo’s own debut at the Berlin Festival in 1981 with the Berlin Symphony Orchestra.

On the first day of rehearsals for this year’s performance, the conductor Michiyoshi Inoue met with Kodo first, to check through the piece together.

He said things like, “This part is sharp, make it cut like a Japanese sword,” and “That part is really menacing!,” and gave us all kinds of advice.

These images might seem obscure, but Mr. Inoue’s instructions were really easy for us to grasp and when we were rehearsing, we could see that his directions were really accurate for the feel of the piece. It felt like he enjoyed following the score and feeling the unique schrony of our taiko, which clashed and harmonized with the orchestra. 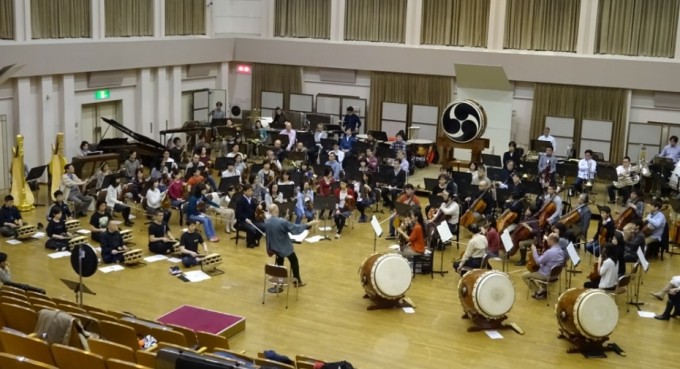 On the second day of rehearsals, we practiced Mono-Prism with the orchestra.

Personally, I felt that the orchestra has its own unique physical synchrony and timing, just like taiko does. By no means are they just playing what is written on the score and simply progressing through the piece. I was able to understand this firsthand by taking part in these rehearsals with them. It was a valuable experience for me to see if their synchrony and timing could harmonize with ours as we played taiko. It is a really difficult challenge. This collaboration has taught me so much already, although I haven’t performed this piece for an audience yet! Please come and see us perform this weekend. 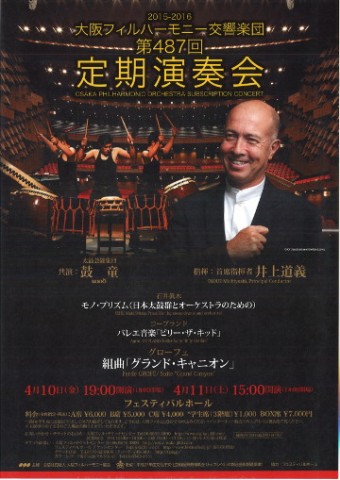