On Dec. 2, WOWOW Live will air a repeat broadcast of our "Amaterasu" performance at Minami-za Kabuki Theater, Kyoto, recorded in October 2013.

There will be a special feature about the Kodo Apprentice Centre on BS Fuji's program "Table of Dreams" (Yume no Shokutaku) that focuses on the daily lifestyle of our apprentices. It will introduce scenes of their daily meals and show their interactions with locals through the regional folk art, onidaiko (demon drumming & dance).

Note: Broadcast times and dates are subject to change without notice. Thank you for your understanding. 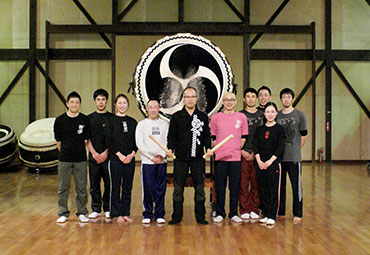 There will be a special feature about Kodo's base, Sado Island, on Yomiuri TV's program "Tooku e Ikitai." The program title means "I want to go far away" and the traveler in this episode is actor Yoji Tanaka. If you're in Japan, tune in to see sightseeing spots on Sado, Kodo during rehearsals, and scenes from the Kodo Apprentice Centre.

On New Year's Day in 2014, a special program featuring some of the recent works of Tamasaburo Bando will be aired in Japan. The program has three parts, two of which feature Kodo: Part 2 shows the "Tamasaburo Bando Special Performances" at Kanamaru-za in November 2012 and Part 3 shows the "Amaterasu" performance at Minami-za in October 2013.

*Please note that the date and times are subject to change without notice.