In 2009, Morihiro Iwata produced a ballet performance in Moscow that featured one of his own works, "Tamashii" (Spirit), which he choreographed to accompany various Kodo recordings. This September, Kodo has been invited to collaborate live with Mr. Iwata live for the first time in the Republic of Buryatia, Russia. We are honored to perform with Mr. Iwata, a former soloist of the Bolshoi Theater Ballet and winner of numerous awards, who is currently the artistic director of the Buryat National Academic House of Ballet. We are also delighted to have the opportunity to visit this region for the first time. 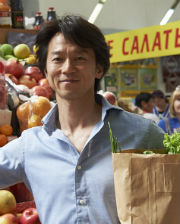 Morihiro Iwata hails from Yokohama, Japan. In 1990 he enrolled in the Moscow State Academy of Choreography (The Bolshoi Ballet Academy) studying under Mr. Alexander Bondarenko. In 1995 he became an apprentice at the Bolshoi Theater and he went on to become the Bolshoi Ballet's first foreign soloist in 2003. He is renowned as a ballet dancer and choreographer.

In November of 2009, Iwata received the Order of Friendship from President Medvedev, who praised his contribution to cultural exchange between Japan and Russia.

In 2012, he left the Bolshoi Ballet and became the artistic director of the Buryat National Academic House of Ballet. In the same year, he was recognized by the Japanese Cabinet Secretariat as a Japanese person who has "contributed to enhancing Japan's international standing through their activities in various corners of the world."