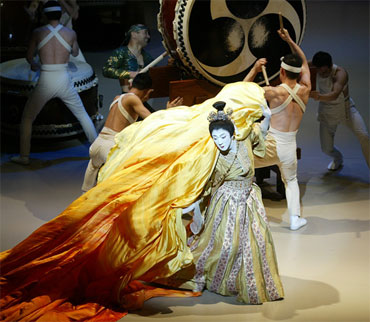 In 2013, musical dance play "Amaterasu" returns with a brand new cast. The production features glorious dance by Tamasaburo Bando as the sun goddess Amaterasu, and Kodo performers playing taiko, koto harps, flutes and singing as they depict the gods who appear in this well-known Japanese myth.

Start:
Please see the calendar below

Seating Details:
All seats reserved. Preschoolers will not be admitted.

Friends of Kodo:
Pre-orders have finished. 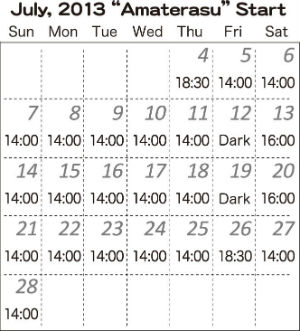 "Amaterasu" was first performed in 2006 at Setagaya Public Theater and Minami-za Kabuki Theater to commemorate Kodo's 25th anniversary. Encore performances were held in 2007 at Tokyo's Kabuki-za. This year, the production returns with a completely new cast.

In 2013, Yosuke Oda (Tokyo, Kyoto performances) and Mitsuru Ishizuka (Fukuoka performances) will tackle the lead role alongside sun goddess Amaterasu, portraying the god, Susano'o. Furthermore, this time Mitsuru Ishizuka will take the reigns as music director. Overall, the performers who were young newcomers in the original production six years ago will become the main essence of the new performance. 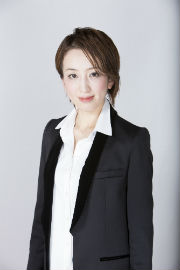 Joining the myriad gods portrayed by Kodo, former Takarazuka Revue performer Harei Aine will appear as Ameno-uzume, who dances with all her might in front of the cave of the sun goddess. This will be Ms. Aine's first time to work with Tamasaburo Bando and Kodo.

Harei Aine joined the Takarazuka Revue in 1997. She stood out right from her debut as a good-looking Hanagumi male role performer, appearing and flourishing in numerous works including "Maihime," "Side Story: The Rose of Versailles," "Gubijin," and "Phantom." Ms. Aine was the male role star of the highly appraised operetta company, embodying both the tradition and refinement of the Takarazuka Revue. She has brilliant expressiveness and outstanding acting abilities. In October 2012, she retired from the Revue, to the regret of many, and just as she set off on a new path, she encountered this production of "Amaterasu."