These four performers have been part of the ensemble since the days of its antecedent group, Sado no Kuni Ondekoza, They laid down the foundations for Kodo’s stage expression just as they paved new roads for the next generation. For many years, as the “face” of Kodo, each of them formed deep bonds with the people they met in their travels throughout Japan and across the globe, working tirelessly to bring their message of music around the world and build Kodo’s core audience.

By creating the title and position of “Distinguished Members,” Kodo shows appreciation and respect for the lifetime of dedicated work of these longtime members. We also hope that bestowing this title on these members will encourage them to leverage the experience and skills that they gained over the years to continue their activities with Kodo in the way that best suits each individual. We kindly ask for your continued support of these members and they enter a new stage of their careers. 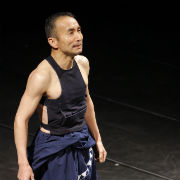 Yoshikazu Fujimoto turns 62 years old this year and is currently Kodo’s most senior member. He has played taiko on countless stages, and after decades as the ensemble's featured O-daiko player and center-man for the Yatai-bayashi climax, he remains the quintessential “Mr. Kodo.” It is his goal to play taiko forever and he wants to continue to meet other taiko lovers throughout Japan for an exchange of ideas and music. 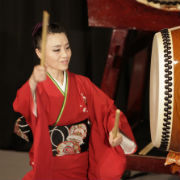 Chieko Kojima has created her own unique world of dance and feminine taiko expression. In her solo project “Yukiai,” as well as through collaborative works such as the Kodo Special Performances on Sado Island, she experiences joy through the deep connections and oneness her expression engenders with her audience. From her base on Sado Island, she will continue her various creative activities as she reexamines the origins of performing arts and her own mission in relation to these arts. 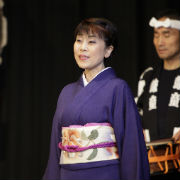 Through song, Yoko has created deep ties between Kodo and countless people around the world. She has a special place in her heart for Sado, and she has made original songs about the island as well as holding workshops at elementary schools there for fifteen years. This year she even composed and wrote the lyrics for a school song for one of those schools. In 2013, she will make a fresh start when she moves her base to her husband Yoshikazu’s hometown of Wachi in Kyoto. She will travel back and forth between Wachi and Sado as she continues her esteemed career as a Kodo member. 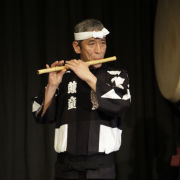 On a taiko-centered stage, Motofumi Yamaguchi established himself as a self-taught bamboo flute player and performer of various instruments. Over the years, he has been at the helm of the musicianship of the Kodo ensemble, composing music and directing performances. In films, plays, and other projects, he has worked as a music director and written and performed various soundtrack music. From this point on, he wants to focus on his solo activities and teaching shinobue (bamboo flute) workshops.