Shogo Yoshii appearing in "Babel" with a cast from 14 nations

Kodo's Shogo Yoshii has set off solo on a trip to Belgium to join a cast of 18 dancers and musicians from 14 countries around the globe. 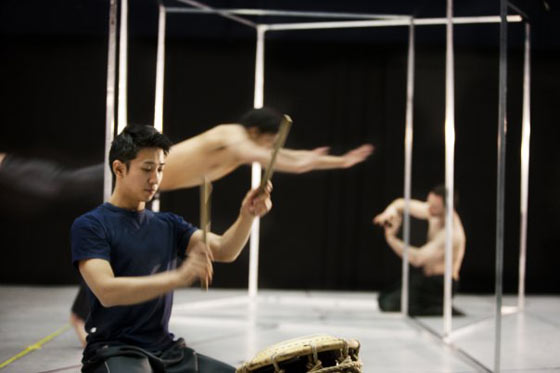 Sidi Larbi Cherkaoui was born in Belgium in 1976. He worked as a choreographer affiliated with Les Ballet C. de la B. and choreographed dance pieces, such as “Rien de Rien”, "Foi" and "Tempus fugit". He has earned a reputation as one of the most sought after young choreographers in the world. In 2007, he performed a duo piece “Zero Degrees” with Akram Khan in Japan. Also in 2007, he created “Apocrifu” for the Theatre de La Monnaie in Brussels, a trio featuring famous Japanese ballet dancer Yasuyuki Shuto, circus artiste Dimitri Jourde and himself, and the Corsican polyphonic ensemble A Filetta. This piece, which received much acclaim in Europe, is toured Japan in 2009. Cherkaoui's style is marked by modern jazz and hip-hop influences, and he is know for his extraordinary flexibility which rivals that of a contortionist.

Daimen Jalet was born in Belgium in 1976. He appeared as a principal dancer with Les Ballets C. de la B. in pieces by Cherkaoui. Jalet received high acclaim for his work as a co-choreographer for “d’avant”. Today Jalet still acts as a right arm for Cherkaoui, but also choreographs works of his own, and collaborates with a wide range of artistes from performing and plastic arts in high-profile projects ranging from Arthur Nauzyciel’s Julius Caesar for the American Repertory Theatre to Erna Omarsdottir in Offaet and the film, The Unclear Age. Jalet's choreography has a strong sense of organicity as he seeks to find a balance between that which he can control and that which he leaves to serendipity.

The title of this production is "Babel," taken from the story of the Tower of Babel from the book of Genesis in the Old Testament. Legend holds that in a time when the whole world communicated through a single language, the people gathered to build a tower that would reach the heavens, and this angered God. In punishment for their hubris, God created different languages, and shattered their means of mutual understanding. This story offers an explanation for why we now have trouble trying to understand other cultures, and how language "barriers" came about.

The performers in this production have a total of 14 different nationalities. Actually, when we began rehearsals, I really felt the difficulty of several barriers. The biggest one was of course the language barrier. It took all my effort to decipher the subtle nuances the artistic director was asking for, and often I couldn't fully explain my own ideas in my own words. I wasn't alone. I heard Italian, French, Flemish, Hindi, and Turkish all flying about, as we all tried to speak and be understood. But the language barrier wasn't the only hurdle. We all experienced a similar phenomenon with musical scales and rhythms. I had a really tough time trying to play Turkish music on my kokyu (Chinese violin). The tuning was a riddle, and I kept saying "Hang on, hang on" as I tried to figure it out.

And rhythm was tough, too. The Italian percussionist wrote some sheet music, and the Indian musicians added their own vocalization of the rhythm in their own language. When they saw the quarter notes, they asked if it was "dah" or "daa." Our instruments and music are structured differently, so they are difficult to combine. Then we would play it all together and end up saying "Is this interesting musically?" The fundamental differences in our intuitions would appear and disappear as we worked.

The more I learned about my colleagues, the more I could see the differences between us. I wondered how to break down the barriers between us... like in the legend, I pondered the challenge of trying to have a broader world view. But as time went on, I learned to enjoy these inherent differences instead.

In the Old Testament, the Tower of Babel was portrayed as a symbol of extravagance and decadence. But the "tower" that we dancers and musicians from 14 countries are trying to build with our various cultures in this production is one that overflows with sympathy and understanding. In the end I decided it was not really a tower at all, but more of a wide-open structure, perhaps a bit like a globe.